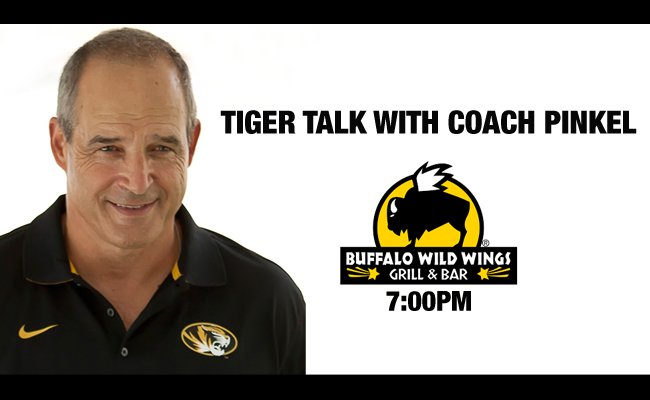 Kelly and Pinkel began by talking about Mizzou’s “Tiger Stripe” game against the Vanderbilt Commodores this past weekend.  Fans wore corresponding shirts to their specific section to make a contrasting “Tiger Stripe” appearance throughout The ZOU.

“Being on the sideline, I get a panoramic view,” Pinkel said. “It was awesome. Talk about your fans stepping up and doing it right.”

To celebrate the Homecoming victory, Pinkel is holding the first visor auction of the season. After every victory, Coach Pinkel plans to auction off the visor he wears after the game and donate the proceeds, as well as a personal check for $1,000, to a local charity. This week’s beneficiary will be the Central Missouri Dream Factory, which grants wishes to children ages 3-18 with critical or chronic illnesses.

“We’ll put it on GaryPinkel.com and people can bid for it, and that money will go to a local charity. That’s something different we’re going to do, and it’s something in a positive way that can help the community a little bit,” said Pinkel, over applause from the audience at Buffalo Wild Wings.

Simon and Hansbrough then joined Kelly to talked about their recruiting trails, and for Simon, academics were a big part of the decision.

“Mizzou was the only school that guaranteed I was going to graduate,” he said.

See Tiger Talk live at 7 p.m. every Monday at Buffalo Wild Wings, or watch online via the GaryPinkel.com livestream.

See Mizzou Football back in action at 3 p.m. Saturday, November 1, against the Kentucky Wildcats. Follow Mizzou Football on Twitter, Instagram, and Facebook for updates throughout gameday. Mizzou Nation can also get involved before the game this weekend as SEC Nation will be in Columbia for its live pregame show. The show will air on the quad from 9-11 a.m. and is free to the public.