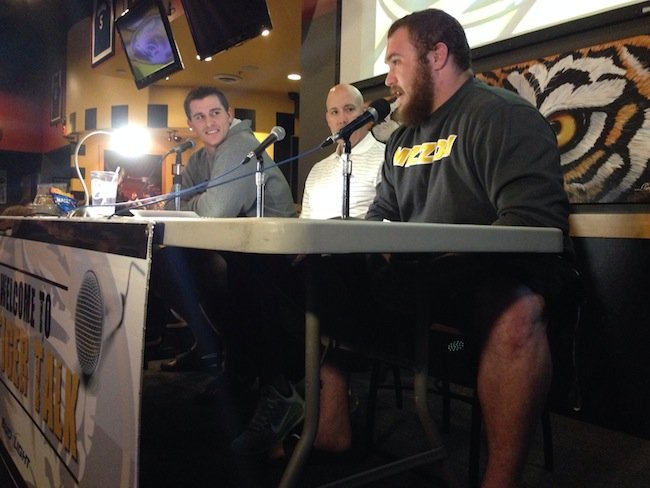 Mizzou fans young and old pack the popular sports grill before the show airs and eagerly wait to hear the latest Mizzou Football updates from Coach Pinkel and the players themselves. Before the show, Pinkel spends time with the fans, walking by tables and engaging with each group.

On this week’s Tiger Talk, offensive lineman Evan Boehm and defensive lineman Matt Hoch joined Kelly and Pinkel for an inside look into their lives, as well as the 2014 football season.

Kelly began by asking Boehm if he had ever imagined he would start for every Mizzou game of his career. 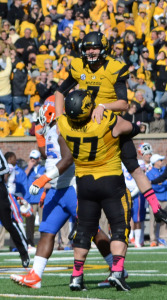 “If you would have told me I would have started 36 straight games for Coach Pinkel, I would have said that is a dream come true.” Boehm said. “It is really happening, and Coach Pinkel does a great job of keeping us healthy and keeping our bodies fresh throughout the season.”

Boehm, a Kansas City native, opened up about his relationship with his father. Boehm’s father, a high school football coach, played a part in Boehm’s journey to Mizzou Football.

“When my dad shows up and watches me play, he goes into coach mode and analyzes how I play,” Boehm said. “The cool thing is that he leaves that behind after a game and he is just a dad.”

Boehm said his father helped him through the recruiting process and that, in part, is how he found Mizzou Football’s family atmosphere.

Boehm also emphasized how the family atmosphere helps within the offensive line.

“You have five guys. Those five guys had no idea how to play with each other when we first got here,” Boehm said. “And that’s what’s cool about the offensive line—those five guys became brothers in an instant.”

Kelly switched gears to discuss Hoch’s journey with injury. He asked Hoch if adversity (like that of an injury) has made him stronger. 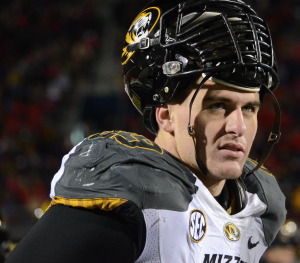 “It is very challenging when it first hits you,” Hoch said. “For me, I use positive psychology and positive self-talk that my Master’s program has been teaching me each and every day to move forward and be proactive.”

Hoch, a Harlan, Iowa, native, assured Kelly that he has been able to maximize his production on the field since returning.

Hoch and Kelly also discussed the competitive atmosphere within the defensive line. Hoch said leadership is a key component for team unity.

“It’s always a competition each and every week,” Hoch said. “It all starts with our leadership on the defensive line. Markus Golden has a drive and passion that you don’t see within college football at all. He gets everyone fired up and gets everyone’s motives going. His mentality and his leadership has been a crucial role in the success of our defensive line this year.”

During commercial breaks, Coach Pinkel spent time with his grandchildren, who came to support Mizzou Football, and he even took selfies with them before rejoining Kelly at the table for more Tiger Talk.

Pinkel stressed the importance of player development and discussed how Mizzou Football emphasizes the Mizzou Made concept—the process of developing players athletically, academically, and socially.

As the interview came to a close, Kelly and Pinkel discussed the upcoming games left in the 2014 football season.

“We’re excited about this week,” Pinkel said. “This is game two in November, and we know the importance in November.”

See Tiger Talk live at 7 p.m. every Monday at Buffalo Wild Wings, or watch online via the GaryPinkel.com livestream. The Mizzou Tigers take on the Texas A&M Aggies Saturday, November 15, at 6:30 p.m. CT on the SEC Network. Follow Mizzou Football on Twitter, Instagram, and Facebook for updates throughout game day in College Station, Texas.