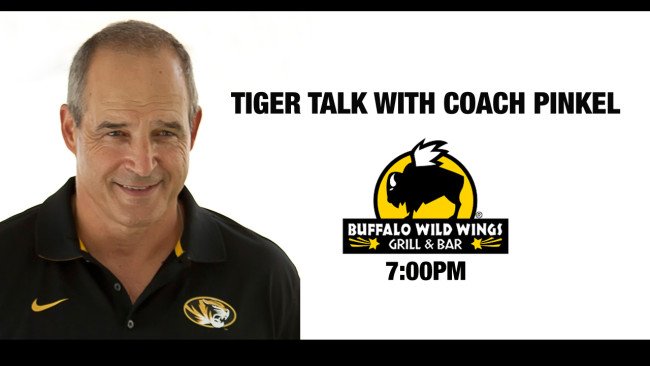 Coach Gary Pinkel joined Mike Kelly, the voice of the Tigers, for the second Tiger Talk of the season at Buffalo Wild Wings on September 20.

Kelly started off by mentioning that ESPN’s College Gameday will be in Columbia, South Carolina, on September 27 to see Mizzou Football take on South Carolina.  Kelly and Pinkel both agreed that Gameday brings added attention to the game, which brings an extra level of excitement.

During the show, Pinkel highlighted how important special teams is, especially the punting game. He gave credit to senior punter Christian Brinser, who averaged 42.6 yards per punt against Indiana, flipping the field and making the Hoosiers go the length of the field to score.

“The kicking game is all about momentum, it’s all about field position,” Pinkel said. “I thought, for the most part, our punt team and Christian Brinser did a really good job of flipping that field back.”

Wide receiver Bud Sasser and linebacker Darvin Ruise then joined Mike Kelly to talk about the loss and how it affects the upcoming contest. Sasser explained how important it is to stay focused and remain a family to fight through adversity and take care of the task at hand.

“It’s about making sure you stay within the family. A lot of guys can get lost when you’re winning and everyone’s telling you how good a team you are, how good a player you are,” Sasser said. “It’s really when you get that first loss and you might be hearing rough things from other people—that’s when you need to just bond together and make sure everybody stays tight and hold everybody accountable to getting their job done.”

“I think Coach Pinkel does a great job of telling us that what we have here at Mizzou is special. This family is a close-knit family, and the biggest thing about what we’re doing here is you’re going to have setbacks. But the biggest thing is how you react to adversity,” Ruise said. “Right now, our focus is not letting Indiana beat us twice. We can’t linger on to that loss and let that carry over; we have a big game coming up Saturday to get ready for.”

Sasser, who had 12 catches for 153 yards against Indiana, also discussed what it means to him to be a co-captain.

“I’m honored, I’m blessed to be in this situation,” Sasser said. “I really do appreciate my teammates, Darvin right here. Everybody on our team, I love those guys to death, I’d do anything for them.

Kelly talked to the two seniors about how quickly their time at Mizzou has come and gone and posed the “Why Mizzou?” question to Ruise.

“I was playing quarterback when I got here, that’s the only reason I really came,” Ruise said jokingly.

He followed that up by saying the family atmosphere drew him to Mizzou.

To see the show live, make sure you attend Tiger Talk at Buffalo Wild Wings at 7p.m. every Monday night. Mizzou fans can also watch live on GaryPinkel.com to hear the Mizzou Football Family talk about the season and a wide range of other topics.

Mizzou Made in the NFL: Week 3
Scroll to top