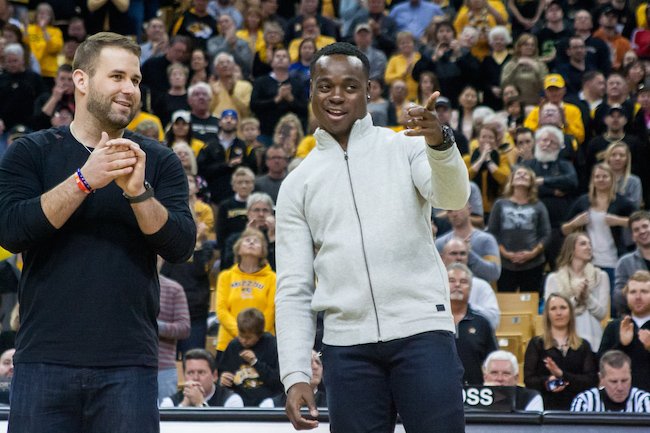 class=”p1″>Mizzou Made legends Jeremy Maclin, Chase Coffman, and Chase Daniel were inducted into the University of Missouri Intercollegiate Athletics Hall of Fame on Friday, February 13.

Maclin was a Consensus All-American in 2007 and 2008 for Mizzou. In his two seasons under Head Coach Gary Pinkel, the wideout, return man, and rushing threat totaled 33 touchdowns and a remarkable 5,609 all-purpose yards, a school record. Maclin also broke numerous single season records in 2008, including catches (102), receiving yards (1,206) and receiving touchdowns (13).

Coffman played under Pinkel from 2005-2008 and finished his Mizzou career as the most dominant tight end in school history. He caught 247 passes for 2,569 yards and 30 touchdowns.

Coffman’s best season came in 2008 in which he caught 90 passes for 987 yards and 10 touchdowns. He won the John Mackey Award (given to the nation’s best tight end) and won Consensus All-American honors for his play in 2008.

The Cincinnati Bengals selected Coffman in the third round of the 2008 NFL Draft. He caught six passes for 64 yards and a touchdown this past season with the Tennessee Titans.

Daniel, who also played under Pinkel from 2005-08, is the most decorated quarterback in Mizzou history. Daniel owns nearly every Mizzou passing record and finished his career with 12,515 yards and 101 touchdowns.

Daniel was a Heisman Trophy finalist and earned Big 12 Offensive Player of the Year honors in 2007. He threw for 4,306 yards and 33 touchdowns during the season.

Daniel has spent five years in the NFL, including the past two seasons with the Kansas City Chiefs. Daniel started one game in 2014, leading the Chiefs to a 19-7 victory over the San Diego Chargers in Week 17.

The three Mizzou Hall of Famers were also honored at the Mizzou men’s basketball game on Saturday, February 14, against Mississippi State.

These talented players are three standouts among the dozens of Mizzou Made players who have gone on to make a big impact in the NFL. Since 2009, Mizzou is in the top five nationally in first-round draft picks.