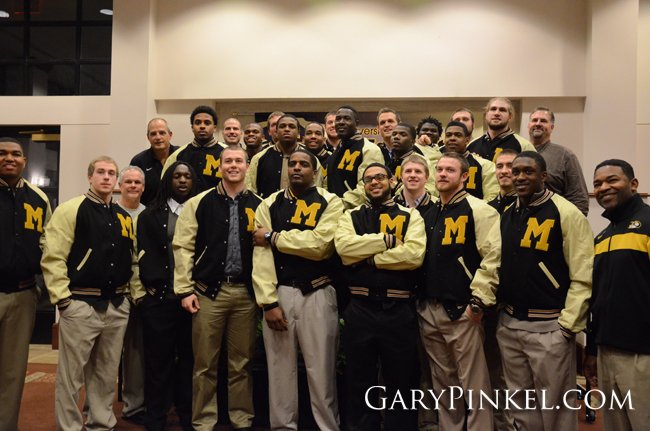 Fresh off of an SEC Conference Division Title and 12-2 record—tied for the best record in the Coach Pinkel era—the Mizzou Football Family was ranked in the top 10 percent for Academic Progress Rate (APR) by the NCAA for the second year running, proving they mean business in the classroom as well.

Mizzou is the only program in the SEC to earn this prestigious honor for the past two years, and one of only two SEC teams to rank this year. Pinkel’s tenure has been a symbol of academic prowess, as Mizzou has ranked at or near the top of these rankings for the majority of his tenure.

Almost every player—97 percent to be exact—under Coach Gary Pinkel’s guidance has earned a degree from the university, or are on pace to do so this summer. Eleven seniors will play the upcoming season under the title of “college graduate.” Players listed below will graduate this month. (Find full commencement details here.)

The NCAA introduced the APR ten years ago to track the academic development and growth of the schools under its jurisdiction. The last four years for each institution make up the multi-year average for the most recent APR report, and schools are given points when their student-athletes graduate or maintain academic eligibility and return to the school the next semester.

Mizzou’s Total Person Program assists players in their studies with a complete collection of tutorial and life skills services. This program offers Mizzou’s student-athletes personalized assistance to cater to each individual’s unique academic needs and objectives.

Pinkel was very proud of the young men he’s coached, as he knows that succeeding on the football field means very little if you don’t do the same off the field as well.

“Certainly we’re very pleased about the recognition, it’s the standard that we expect at Mizzou,”he said. “When I talk to parents during the recruiting process, I look them in the eye and tell them that we’re going to help their son grow on and off the field, and that includes having him leave with his degree from Mizzou.”

Pinkel also praised Mizzou’s educational staff, by far one of the most critical components of high achievement in the classroom.