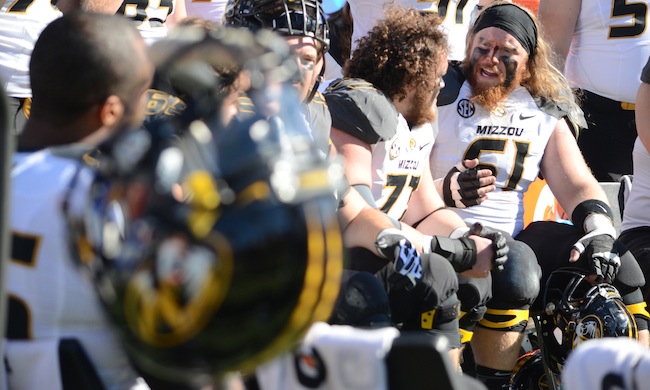 SPRINGDALE, Ark. – Mizzou Football senior offensive lineman Max Copeland (Billings, Mont.) has been named one of three finalists for the Burlsworth Trophy, awarded annually to honor the nation’s top collegiate football player who began his career as a walk-on. Copeland is joined by Wisconsin wide receiver Jared Abbrederis and Tulsa running back Trey Watts as a finalist, chosen from an initial list of 53 nominees, nationally.

Copeland stands as a key piece of Mizzou’s stout offensive line unit, whose performance this season has helped vault the Tigers to No. 5 in the latest BCS standings. Mizzou’s offense ranks 17th in the nation in total offense (491 yards/avg.), 18th in rushing offense (238 yards/avg.) and 13th in offensive scoring (39.7 points/avg.).

A dedicated scout team player for Tigers for his first three seasons in the program, Copeland received his opportunity to play as a junior in 2012, when he started 11 games. Following the season, Copeland was awarded Mizzou’s Unsung Hero Award for his outstanding dedication to the program.

Copeland has thrived in the class room at Missouri, as he pursues a physics major. He chose to walk on with head coach Gary Pinkel’s program despite living in Montana, as his father is a Missouri graduate. Copeland was awarded a scholarship prior to the 2012 season.

A walk-on is defined as a player who began his first season of participation with a Division I (FBS) football program without financial aid of any kind from his university’s athletic department.

Mizzou fans are encouraged to support Copeland by way of a Fan Vote at www.burlsworthtrophy.com. Fans are limited to one vote per day, and the voting will conclude Wednesday, Dec. 4, at midnight CST. The Fan Vote counts as five percent, and it is combined with the results from the Selection Committee.

The Burlsworth Trophy is named in honor of Brandon Burlsworth, who walked on to the Arkansas Razorbacks in 1994, worked his way to being a three-year starter and was eventually named an All-American in 1998. Burlsworth was selected as the 63rd overall pick by the Indianapolis Colts in the 1999 NFL Draft, but was killed in a car accident 11 days later. The Burlsworth Foundation was created in his memory and supports the physical and spiritual needs of children, in particular those children that have limited opportunities.

For more information about the Burlsworth Trophy, visit www.burlsworthtrophy.com.