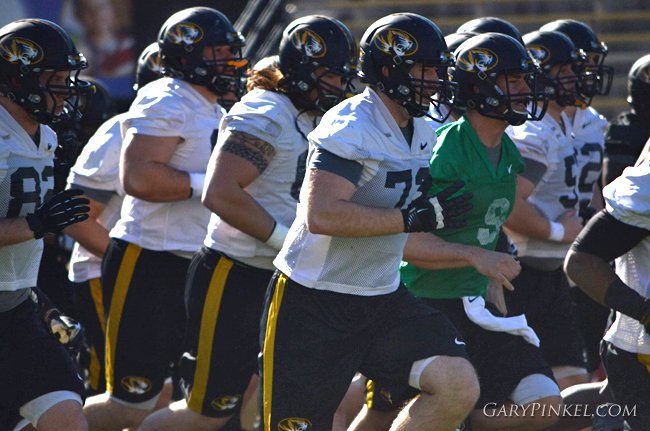 The Mizzou Football team had its second spring practice of the season Thursday.

As they begin gearing up for the 2014 season, the offensive line is focusing on building teamwork and relationships with new players.

“It’s utterly important that we try and get together as much of possible and just watch film or go to the movies just to bond and be able to act like a family,” senior wide receiver Jimmie Hunt said after Thursday’s practice. “It’s really family-oriented around here.”

Junior offensive lineman Evan Boehm said these types of activities help the team get to know each other better.

Thursday’s practice was the second of 14 practices the team will have leading up to the annual Black & Gold Spring Game on April 19 at 1 p.m.

“Over these next few practices, we’ll be together enough to where guys will be getting in to it a lot and a lot of guys will start bonding together,” said senior wide receiver Bud Sasser. “And I think that’s when it all gets together, or at least starts to.”

Sophomore quarterback Maty Mauk said getting back to working with the coaches is helping the team come together.

“Chemistry, especially on our offense, it’s all timing,” Mauk said. “Last year I was with most of these guys, so we have a little bit of chemistry. But it’s a new season, and everyone is faster.”