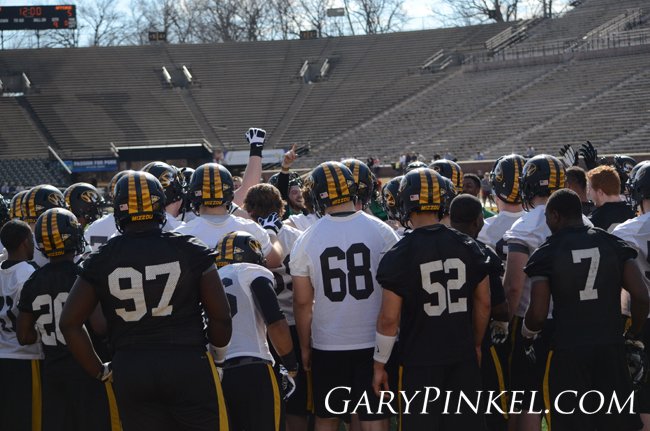 The Mizzou Football Team had its first spring practice of the 2014 season yesterday at The ZOU. It was the team’s first time playing together since they won the Cotton Bowl in January. The Tigers won the SEC Eastern Division Championship after a 12-2 season in 2013.

“There’s no question about our players,” said Head Coach Gary Pinkel after Tuesday’s practice. “We go through a winning conditioning program—we call it the Winning Edge Program—and they’re all player development, strength, speed, quickness, since the day they got back. Now it’s time to play football. That’s why you do all this stuff, so you can become a better football player. It was a high-energy practice, a lot of good things.”

Tuesday’s practice was the first of 14 total practices that will lead up to the annual Black & Gold Spring Game on April 19 at 1 p.m.

“It felt good, just to come out and be with the team and get back to work,” senior running back Marcus Murphy said while standing on the field. “We’ve got a lot of work to put in and get back to track to where we were last season, so it felt good.”

The team practiced on the afternoon of the warmest day of the year, and 75-degree weather made for some optimistic players.

“A lot of people are just coming out excited,” senior defensive lineman Markus Golden said. “We’re still excited from last year, but we’re just trying to move on and get better. That’s the goal. That’s the goal everyone is still focusing on, and that’s just to keep getting better everyday.”

“Last season we really did finish off strong with that Cotton Bowl win and found some continuity as a team to give us some intrinsic motivation to strive for this next season,” senior offensive lineman Mitch Morse said. “But we have to remember that the Cotton Bowl was last season, and we’ve got to write the new 2014 chapter. And I think these guys know that for the most part. We can’t come in like last year’s destination is easy. We’ve got to come out and play hard.”