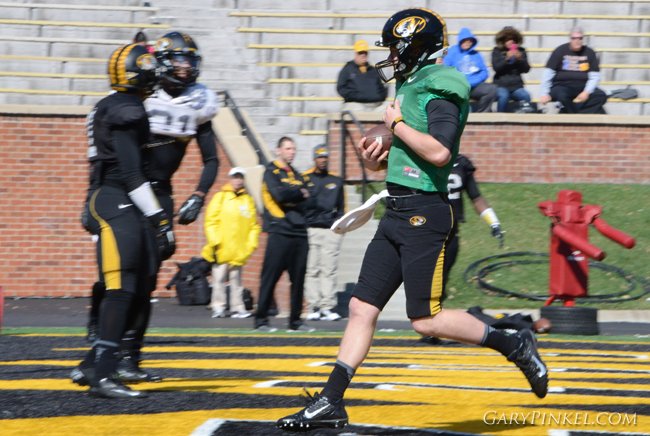 Maty Mauk looked impressive and in control of the first team offense, Morgan Steward ran for more than 100 yards and three scores and the offense defeated the defense in the first Missouri football spring scrimmage on April 5.

Exactly 14 weeks after Missouri’s 41-31, Texas-sized shootout win in the Cotton Bowl over Oklahoma State, many former Tigers were in attendance to get an early glimpse of the next chapter in Missouri football.

Henry Josey and L’Damian Washington watched as the offense dominated, with both Mauk and Corbin Berkstresser throwing touchdowns and Steward breaking out for a 59-yard touchdown run.

The defense had some great moments, too, like sophomore lineman Josh Augusta‘s suffocating tackle for loss and a swift sack by corner back Aarion Penton.

“It’s very spirited, very competitive, which is great,” said Head Coach Gary Pinkel. “The importance of next week is in fixing problems. Recognizing the things you do good is important but fixing problems, getting better, finding what you have to do to get better will ultimately determine how good of football team we are.”

Andrew Baggett got things going with a 44-yard field goal that split the uprights.

Mauk completed a 30-yard pass down the right sideline to redshirt sophomore receiver Levi Copelin, who made a diving catch. The completion led to a Tiger field goal.

On the next series, Mauk tried to go deep again, only to force one of the game’s defensive highlights.  Veteran safety Ian Simon did a great job tracking the ball and knocking it away from the receiver.

Chastin Ward followed soon afterwards with an interception down the field.

“We have a pretty young defense,” defensive lineman Shane Ray said. “Overall I feel like we did a good job.  I think right now we’re still trying to incorporate the core values of the team, running to the ball, getting your assignment down, getting things done.”

Mauk completed a 19-yard touchdown to Darius White, who scampered into the corner of the end zone and made a nice catch.

Berkstresser took over the second team next and finished a drive with a beautiful toss to Gavin Otte in the end zone. Otte made a fantastic play to reel it in, diving and tumbling after he caught the ball with his arms outstretched. Otte is a senior walk-on from Rolla, Mo.,  and he knows how to haul in touchdowns. The throw from Berkstresser was a 31-yard score.

But the day belonged to Steward. The 6-foot, 215-pound tailback out of Staley High in Kansas City, Steward punished the line for three touchdowns. One was a 20-yard run right up the middle. For his last score, Steward spun and shot his way up the field, breaking tackles to complete a 59-yard run.

Coach Pinkel liked what he saw.

“He said, ‘good job’,” Steward said. “That was exciting. He hands out those compliments like 100-dollar bills, so I was excited about that. He said great north-to-south running,. Because that’s what we talk about. Just running hard. I have to stick to what makes me a better back. Just running hard and sticking to my strengths. “

Of course, all these scrimmages are preparation for the annual Black and Gold Spring game, which will be played at 1 p.m. on Saturday, April 19 at The ZOU. Tickets are available at MUTigers.com