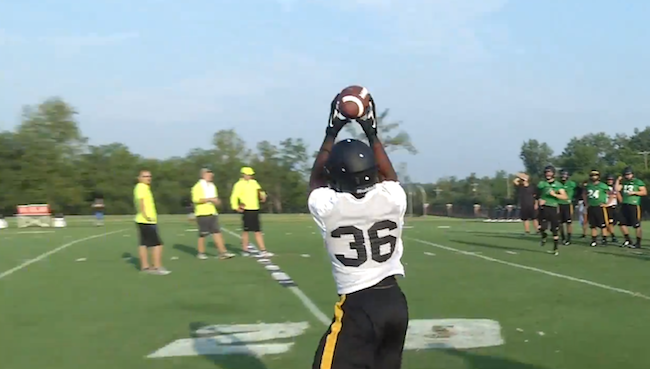 For Morgan Steward, being an athlete was a dream of his since childhood. After trying many different sports, he settled on football.

The redshirt sophomore running back from Kansas City, Missouri played in 12 games last season and had 21 carries and a touchdown. In high school, he was the career rushing leader at Staley with 4,184 career yards and 46 rushing touchdowns. He led his team to a 13-0 season his senior year and a Missouri State Championship in Class 5. Steward was also named the Class 5 Offensive Player of the Year in the state of Missouri and was a unanimous First-Team All-State selection his senior year.

In the first spring scrimmage of 2014, Steward had three touchdowns with one being a whopping 58 yards. He finished the day with 117 total yards and 13 carries.

Steward plans to major in business communication and enjoys playing the piano, listening to music and running in his free time. He says his faith is what drives him the most and he looks to be a dependable running back for Mizzou football this year and hopes to help lead the team to a championship.

“We’re going to expect a lot of great things from him this year,” said Mizzou Football Running Back Coach Brian Jones.