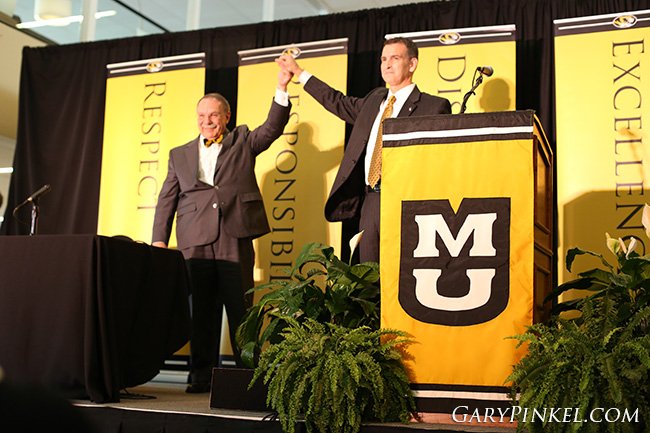 of Missouri Chancellor R. Bowen Loftin announced on Tuesday, March 10, 2015 that Mack B. Rhoades IV has been appointed director of Intercollegiate Athletics at Mizzou. He will assume the post in late April.

“I think he’s a great hire,” Mizzou Football Head Coach Gary Pinkel said. “We had to replace a great athletic director, Mike Alden. We got a guy that can continue on and keep improving the University of Missouri Athletics. I think we got the right guy without a question.”

“Mack Rhoades brings a wealth of experience as a Division I athletic director to Mizzou, and he has demonstrated a commitment to our core values of academic integrity, social responsibility and competitive excellence,” Loftin said. “I am delighted to welcome a leader with a track record of enhancing the student-athlete experience and a proven record in fundraising and facility development. We found the right fit at the right time to take Mizzou Athletics to even greater heights.”

At the University of Houston, Rhoades restored the athletics program across the board, including enhancements in the student-athlete experience, academics, facilities, fundraising and competitiveness.

“The University of Missouri is a world-class institution, and I am honored to serve as its next director of athletics,” Rhoades said.  “Success begins with great people and I look forward to working with our talented student-athletes, coaches and staff to keep the athletics program among the nation’s elite. Amy and the girls and I are extremely excited to become members of the Mizzou family, and I am grateful for the opportunity to work with Chancellor Loftin and President Wolfe. I look forward to traveling the state to meet the fans who are the heartbeat of the Tigers.”

During his tenure, Houston raised nearly $100 million and built $160 million worth of new facilities, including a new on-campus football stadium and a men’s and women’s basketball development center. Rhoades also negotiated a new multimedia rights deal for the athletics program as well as one of the top five facility naming rights deals at the collegiate level.

Rhoades holds a bachelor’s degree in health sciences from the University of Arizona and a master’s degree in athletics administration/sports management from Indiana University. Rhoades succeeds Mike Alden, who announced Jan. 29 that he will step down this year to join the College of Education as an instructor. There he will participate in the Positive Coaching Program and higher education leadership courses.