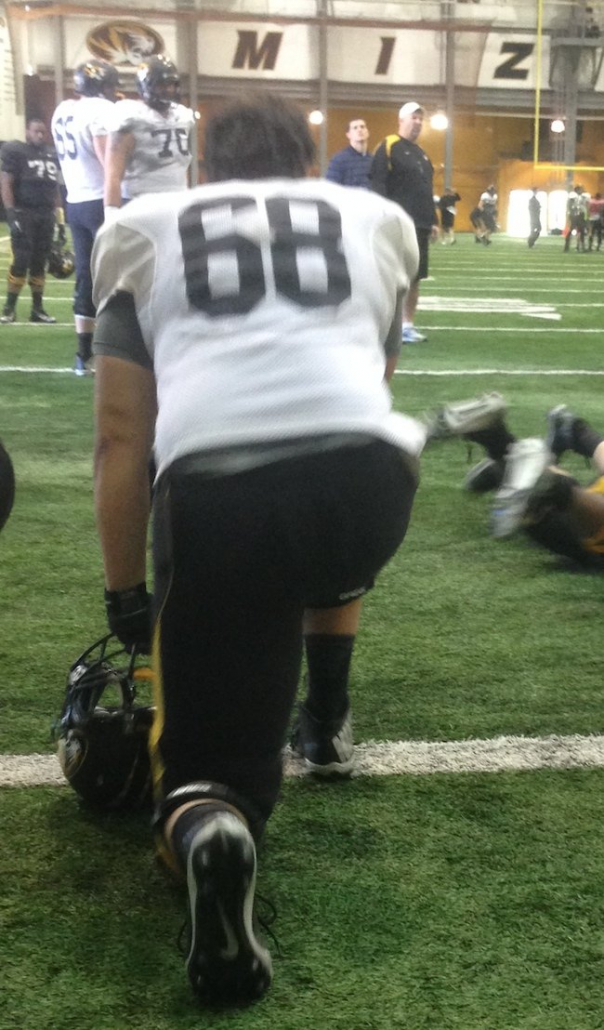 Mike Fairchild is a 6-foot-4, 275-pound freshman offensive lineman from Overland Park, Kan. His work ethic, aggressiveness and ability to finish blocks have coaches excited about his future at Mizzou.

Fairchild was one of the top lineman from the state of Kansas’ class of 2014, earning multiple first team all-state honors. He graduated early from Blue Valley North high school with a 4.0 GPA and enrolled at Mizzou in January.

The offensive lineman was mic’d up in practice today, and veterans Mitch Morse and Conner McGovern interviewed him about his time in Columbia so far and how he’s adjusted to the college game in the past four months.

When asked about living in the dorms, Fairchild summed it up with one word: freedom. But although he does enjoy not having a curfew and being able to eat whatever he wants, he does miss his parents at times. When homesickness strikes, his roommate, fellow freshman offensive lineman Clay Rhodes, is there to help him get through it.

On the football field, Fairchild feels that he’s already grown tremendously as a player in his short time at Mizzou. Offensive line coaches Josh Henson and Bruce Walker have helped him improve his game, and Morse, McGovern and the other members of the offensive front have welcomed him with open arms into the Mizzou Football Family.

And in addition to growing as a player, Fairchild has apparently grown as a jokester, too. He told Morse, to his face, that his hairline isn’t receding. We all know that isn’t true.