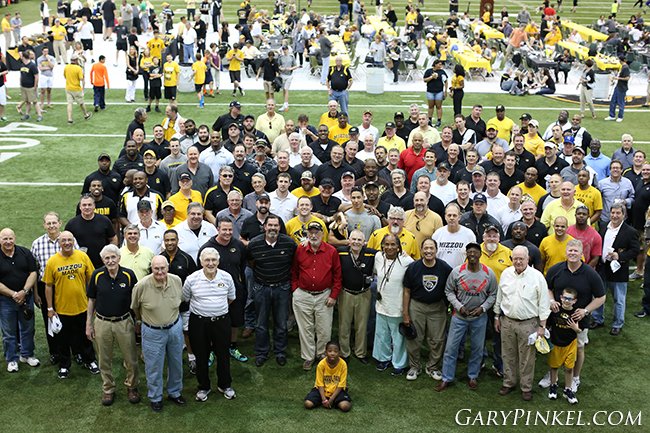 Hundreds of Mizzou Made players returned to Columbia on April 18 for the annual Mizzou Black and Gold Spring Game, including current NFL stars Jeremy Maclin, Brad Smith, Sheldon Richardson and Tim Barnes. The Mizzou Tigers met at the Dan Devine Indoor Pavilion for the annual former players reunion before kickoff.

The Mizzou Made players were recognized on the field in The ZOU before a 30,000-plus crowd. Mizzou Made offensive lineman Mitch Morse called it “a celebration… to connect the generations of Tigers that have been here before and get a first look of what we’re going to look like this year.”

Mizzou Made defensive lineman Sheldon Richardson said, “It feels great to be back. It’s always good to come back home and get to see the old true Mizzou fans.”

The Black and Gold Spring Game was an opportunity for fans to get one last look at the 2015 Mizzou Tigers before their season opener September 5th in The ZOU. Be sure to check out the 2015 NFL Draft April 30th as the next round of Mizzou Made players enter the NFL.

Mizzou’s Ingredients to a Self Starter
Scroll to top