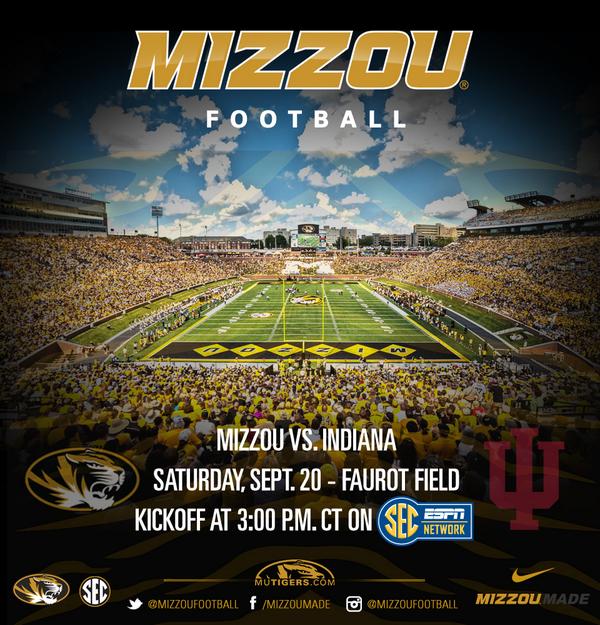 Mizzou Football will face off with the Indiana Hoosiers at 3 p.m. CT. The game will be televised live from The ZOU on the SEC Network.

The Tigers and the Hoosiers have had quite a history together. The upcoming face-off will mark the second straight season and the 12th time overall that the schools will meet on the gridiron. Mizzou claimed a 45-28 victory in Bloomington, Ind., last year.

The September 20 game will be the Hoosier’s first appearance in The ZOU since 1991, where the teams tied 27-27. The tie wasn’t a first for the teams, either; Mizzou and Indiana also played in 1988, ending with a 28-28 standstill. Indiana leads the overall series by a 6-3-2 count.

There are seats still available for the Mizzou-Indiana game, which can be purchased online at www.MUTigers.com, or by calling 1-800-CAT-PAWS (884-PAWS locally). For Mizzou Football ticket updates, visit MUTigers.com and follow Mizzou Athletics on Twitter @MUTigersdotcom.

Mizzou Football, currently 2-0, is preparing for the arrival of the UCF Knights on September 13 at 11 a.m. in the ZOU. The game will air on the SEC Network and on the radio via Tiger Network affiliates.

Jake Hurrell Snaps His Way to Scholarship
Scroll to top