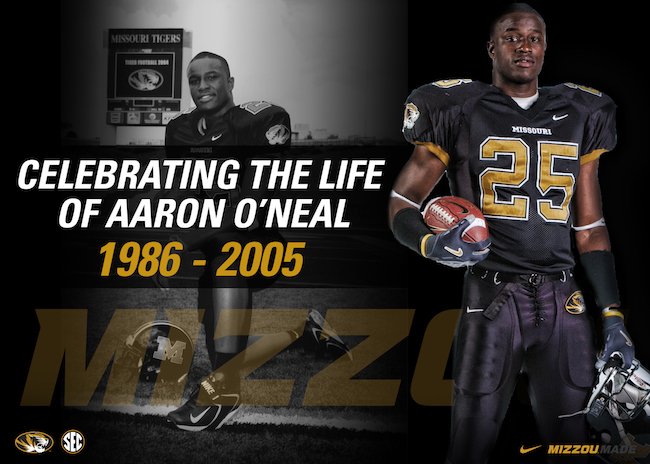 COLUMBIA, Mo. – Mizzou Football and Mizzou Athletics are set to celebrate the life of former Mizzou linebacker Aaron O’Neal on Saturday, October 10, 2015 during the Homecoming Game vs. Florida at 6:30 p.m. While pursuing his dream of playing college football, Aaron’s dream died tragically on the afternoon of July 12, 2005, when he passed away following a voluntary workout with his teammates. While the pain of Aaron’s loss will dwell indefinitely, his memory and spirit will live on forever at Mizzou. Aaron’s engaging smile, his selfless nature and his warm friendship will never be forgotten, and it is all of those things that will be celebrated with his entire family and the Mizzou family during Saturday’s game.

Aaron was a redshirt freshman linebacker heading into the 2005 season, with much promise to his future. He redshirted in 2004 after coming to Mizzou from Parkway North High School in St. Louis, Mo., where he was a four-sport standout student-athlete. He earned Class 5 all-state honors as a running back as a senior, when he rushed for 1,562 yards and 19 touchdowns. He also earned all-metro, all-conference and all-district honors, as well as his team’s offensive MVP honor as a junior, when he ran for 1,207 yards and 14 TDs. Aaron had 800 yards and 9 rushing TDs in just four games as a sophomore, including a school-record 254-yard outing against Webster Groves, and he left his school owning virtually all of Parkway North’s career rushing and scoring records. An outstanding all-around athlete, Aaron also excelled in basketball, track and baseball at Parkway North, and was part of the team which finished 4th in the 2003 state baseball championships. His high school football coach was Bob Bunton. He was the son of Lonnie and Deborah O’Neal.

O’Neal may be gone, but he has not been forgotten by anyone in the Mizzou community and his memory lives on with Gary Pinkel and the program 10 years later.

Gary Pinkel has done his best to help the program remember O’Neal, the man with the ‘million-dollar smile’ as he was renowned. Every year, a linebacker will wear O’Neal’s #25. Currently, that bestowment belongs to sophomore LB Donavin Newsom; he will wear it for the remainder of his career and pass along to another St. Louis LB. Newsom, just like O’Neal, graduated from Parkway North High School in St. Louis, Mo.