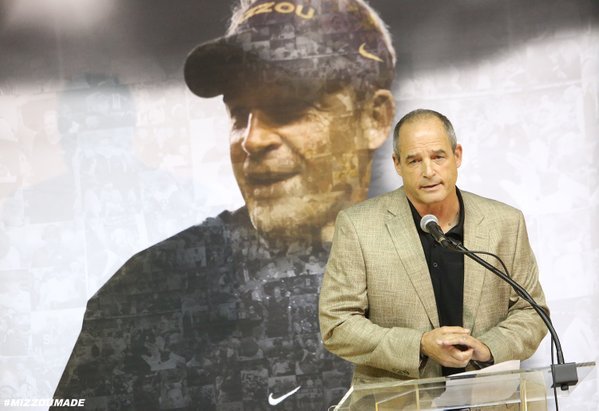 Head Football Coach Gary Pinkel held a press conference at Mizzou Arena on Monday, November 16, 2015 to discuss his recent decision to retire from coaching at the end of this season.  Friends, family and fans all gathered to support Coach Pinkel and hear more about his health, his decision to retire and the remainder of the 2015 season.

“The most important things is my players at Toledo and here at Mizzou,” Pinkel said during the press conference. “I’m going to miss interacting with them, scolding them and hugging them.”

Pinkel announced on Friday afternoon his intention to retire at the end of the season due to health reasons, shortly before his Tigers responded with an emotional 20-16 win Saturday evening over BYU in Kansas City.

“I’m so proud of them for competing like they did after being told the night before,” Pinkel said.

He will step aside as Mizzou’s winningest coach in program history, with a current win total of 118 as his Tigers will close out the 2015 home season with a Senior Night game against Tennessee at 6:15 p.m. in The ZOU.