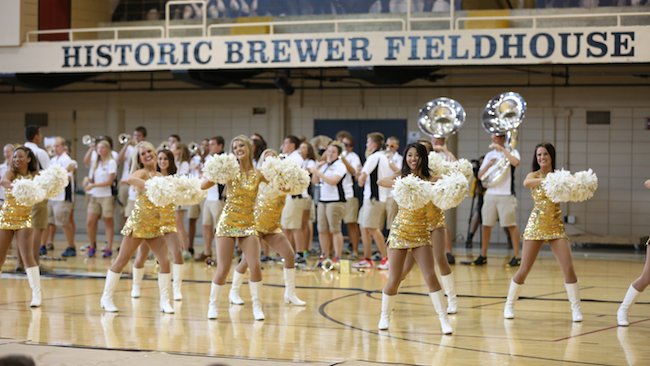 With Mizzou’s season opener just 9 days away, Head Coach Gary Pinkel had a few words of wisdom to pass along to the incoming freshmen on Thursday at the Campus Picnic and Spirit Rally.

“I encourage you to make sure you put everything into this and get committed to a lot of different things here,” Pinkel told the sizable crowd at the MizzouRec.

Pinkel also touched upon the importance of staying focused on the things that really matter, like getting your work done and going to class.

“Make sure you keep your priorities right; make sure you do not procrastinate,” Pinkel said. “I’m just telling you stuff that my players do when they get into trouble with this.”

Pinkel also advised the students to do the one thing that brought them here.

“How about this one: Make sure you go to class,” Pinkel said. “That’d be a good idea, huh?”

Pinkel also said that the students should use their heads, and their best judgment as well when it comes to making decisions that will reflect positively upon their lives.

“People try to ask you to get in part and do things,” Pinkel said. “And the bottom line is when you analyze it, do the right thing,”

Pinkel stressed that not only is being a Mizzou Football player rigorous, but being a fan is as well.

“When you get in the ZOU you don’t sit around like this….you’re up and you’re going,” Pinkel said. “And you’ll see all of the other [students] and you’ll understand that when they train you in what it’s like to be a Missouri Tiger fan.”

Pinkel also reminded the freshmen that they will be Mizzou Tigers for life.

“This isn’t a four-year deal,” Pinkel said. “It’s so much bigger than all that.”

Mizzou’s class of 2018 painted the Rock M Hill at Faurot Field on August 22 in preparation for Mizzou Football’s season opener on August 30 against South Dakota State. The game will be broadcast on ESPNU and Tiger Network radio affiliates.