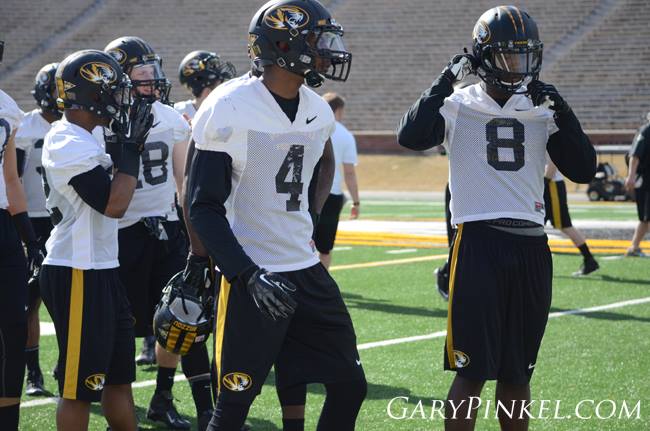 Head Coach Gary Pinkel started the tradition of playing music at practice last spring. It’s since evolved, and now players sing songs like, “My Girl,” by the Temptations and dance to hip-hop, rap and pop music like Pharrell Williams’s “Happy.”

Pinkel showed off his dancing skills in the locker room after the team’s Cotton Bowl win against Oklahoma State in January.

“Coach Pinkel did it, and it was just exciting, you know?” running back Marcus Murphy says. “I couldn’t believe he was dancing. I didn’t believe he had it in him, but I see that he does now.”

But not all of the coaches are as into dancing as Pinkel is.

Quarterback Maty Mauk says his favorite dancer on the team is defensive back Aarion Penton. “He’s just got some movement he can do with his body,” Mauk says.

“All the guys will be out here smiling, dancing just getting ready for practice – kind of like a warm- up,” Golden says. “We’re just getting in the mode of practice because practice is real serious, so it just gives everyone a chance to have fun before practice.”

The singing and dancing isn’t all about just having fun, although that’s mostly why Pinkel likes it.

“I think there have been a lot of studies on music and how it enhances, it elevates emotion, alertness, and it’s true,” Pinkel says. “I’ve seen some really incredible examples of that. And also we want to have a little bit more fun.”