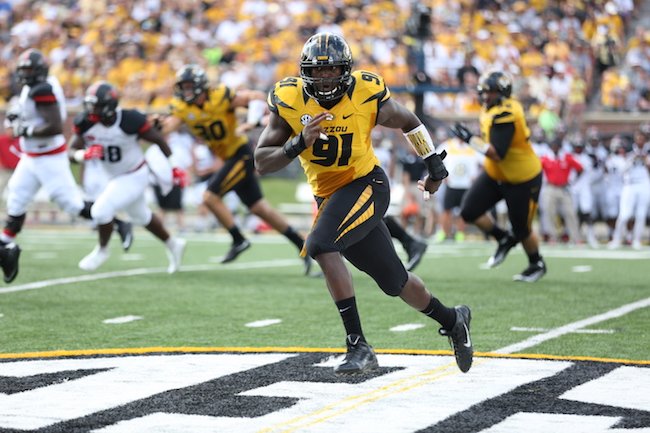 RS Sophomore leads the SEC in tackles for loss

COLUMBIA, Mo. – Mizzou Football’s Charles Harris has been added to the Chuck Bednarik Award Watch List, as announced by the Maxwell Football Club on Thursday. The original list was comprised of players based on their 2014 performance but Harris was one of 13 players identified by the Maxwell Club that warrant attention due to noteworthy play. The Bednarik Award is given to college football’s Defensive Player of the Year.

Harris joins teammate Kentrell Brothers as Brothers was on the original Bednarik Award Watch List, which was released in July. Harris ranks fifth nationally and leads the Southeastern Conference with 11.5 tackles for loss in 2015. Harris is also ranked seventh in the SEC and among the nation’s top 60 in quarterback sacks with 4.0. Harris recorded 2.0 sacks at Arkansas State, equaling his career total coming in. He also registered 4.5 tackles for loss (-24 yards) at A-State, which marked the first time a Mizzou defender recorded 4.5 or more tackles for loss in a game since Stryker Sulak had 5.0 TFLs vs. Illinois Aug. 30, 2008.

Harris is fourth on the team and leads Mizzou defensive linemen with has 29 tackles (18 solo) with 11.5 tackles for loss (-46 yards), 4.0 sacks (-23 yards), four QB hurries and a forced fumble through six games. Harris is a big reason why Mizzou leads the SEC while ranking third nationally with 57 total tackles for loss with at least seven in each game. Harris has had multiple tackles for loss in five of Mizzou’s six games this season and he is averaging -4 yards per TFL this season.