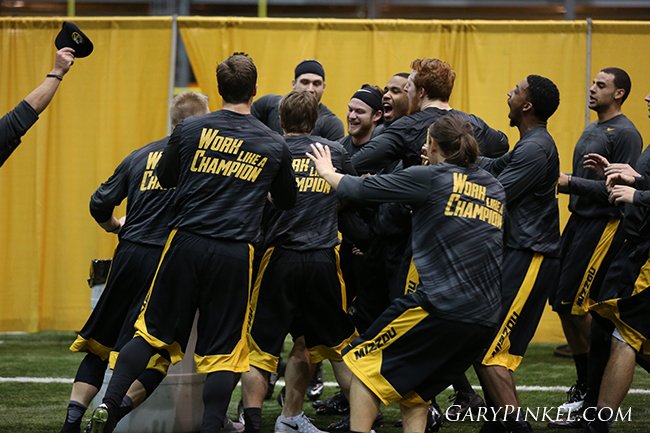 href=”https://www.gpmade.org/mizzou-made/” target=”_blank”>Mizzou Made, the all-encompassing player development program of Mizzou Football, helps Mizzou football players become their best possible selves academically, socially, and physically. But Mizzou Football achieves as much as it does on the field as it does off it. Winning Edge is Coach Gary Pinkel’s own physical and mental training regiment that focuses on quickness, attention to detail and playing hard start to finish.

Winning Edge takes place every Tuesday and Thursday at 6 a.m. for six weeks in the off-season and is comprised of three stations. Station one focuses on the mechanics of fundamental running for every position and every game scenario. Station two is an agility station, working on speed, footwork, form, and changing direction. The third and most grueling station is called ‘mats’, dubbed after a drill done by Coach Pinkel and the Kent State football team on wrestling mats. Mats focuses on mental toughness and never quitting through a series of agility drills.

Winning Edge is among the best football development programs in the country, and is one part of what makes a Tiger Athlete truly Mizzou Made.

Mizzou Night at the Blues Game
Scroll to top