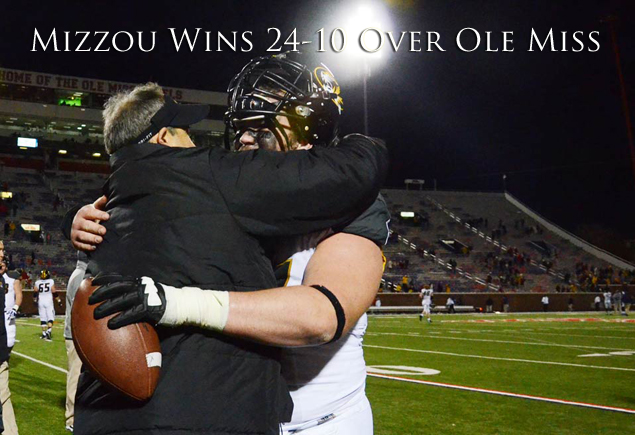 James Franklin started his first game in six weeks, and he led Mizzou to a 24-10 victory over Ole Miss in Oxford on Saturday night.

The senior captain wasted no time getting back in a groove, as he connected with Marcus Lucas for a gain of 19 yards on Mizzou’s first play from scrimmage. Seven plays later, Henry Josey found the end zone from 4 yards out to put Mizzou up 7-0 two minutes and 45 seconds into the game.

After trading stops, the Rebels put together a 90-yard drive to give themselves a first-and-goal at the one. Mizzou’s bend-but-don’t-break defense came up big in the red zone once again though, just as they have all season, and forced Ole Miss to attempt a field goal. That’s when Harold Brantley made his first of two big special teams plays, blocking the kick and preserving the Missouri Tiger’s 7-0 lead.

Maty Mauk took the helm on Mizzou’s fourth possession, and he performed brilliantly. He completed his first pass to Jimmie Hunt for 11 yards and then an incompletion and a 2-yard scramble made it third-and-eight. Mauk then threw a perfect pass to Bud Sasser, who had a step on his defender and turned the completion into a 60-yard gain. Andrew Baggett put three more points on the board with a 33-yard field goal right down the middle to give Mizzou a 10-point advantage.

The Missouri defense buckled down in the red zone yet again its next time on the field and forced another Ole Miss field goal attempt. This one made it through the uprights to bring the Rebels within a touchdown.

The Mizzou offense answered right back. Franklin was 3-3 for 52 yards on Mizzou’s ensuring possession and executed a perfect option run to Marcus Murphy, who finished off the drive to make it 17-3 before the half.

In the third quarter, Mizzou faked a punt and snapped it to Brantley, who picked up the first down and then some and gained 26 yards on the play.

Some nice running by Josey and Franklin and two big completions to L’Damian Washington drove Mizzou to the Ole Miss 10-yard line on its ensuing possession. Josey knew what do from there, as he scampered into the end zone untouched for his second touchdown of the day to put Mizzou up 24-10.

The Mizzou defense put the clamps down for the remainder of the game, limiting Ole Miss to just 75 yards on their final three possessions. One more red zone hold gave Mizzou the ball at its own 13 with 8:08 remaining. The Tigers orchestrated a beautiful drive to run out the clock and secure the victory.

Franklin finished the day 12-19 for 142 yards. He also carried the ball eight times for 50 yards. Josey turned in 95 yards to go along with his two scores. Murphy and Russell Hansbrough held up their ends of the three-headed attack and gained 69 and 33 yards on the ground respectively. In total, Mizzou outgained Ole Miss 485-378.

Mizzou returns home this week to face Texas A&M. Kickoff is set for 6:45 pm CT in The ZOU and will air on ESPN. It’s the annual blackout game and senior night. Fans are encouraged to wear black and be in their seats early to honor the outgoing 2013 senior class.