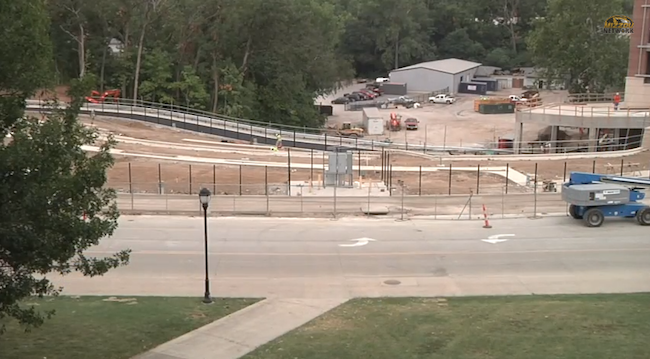 Truman’s Terrace is opening this fall, just in time for the start of the 2014 Mizzou Football season. The new tailgating area is one part of the renovation project to expand The ZOU, which will also add an indoor premium club level, outdoor premium club seats and loge boxes to the east side of the stadium.

The Terrace will include live entertainment at each home game. Aside from watching performances from the Golden Girls, cheerleaders and Marching Mizzou, terrace members will be able to enjoy live local bands.

“We’re trying to make it a really festive environment, and it’s all part of the same game,” Gillin says. “It’s attached to the stadium, but also exclusive.”

Construction on the east side expansion has been going on since last football season.

“A lot of landscaping has been done,” Gillin says. “We’ve brought in a lot of dirt, we’ve terraced it… we’ll have a terrace that goes down and down again and it’s real gradual. We’ll have our food in there. We’ll have food tents and beverage tents and then a road around the outside. We’ve changed the landscape entirely.”

Fans who want to experience Mizzou Football homes games from the terrace have two ticket options: The Membership Package and the Private Tent Package.

The Membership Package costs $200 per game and allows individual fans to enjoy all-inclusive access to a food and beverage buffet, live music, television, an a la carte cash bar and a social lounge.

The Private Tent Packages can accommodate groups of up to 25 or 50-75 people. These packages include a tented tailgate space, tables and chairs, a catered meal, non-alcoholic beverages and access to the a la carte cash bar.

The 25-person Private Tent Packages for the fourth home game against the University of Georgia are already sold-out. The 25-person tent package for the Homecoming game against Vanderbilt costs $6,000 and the 50-75-person costs $12,000.

Truman’s Terrace will be open for two hours before the game and one hour after.