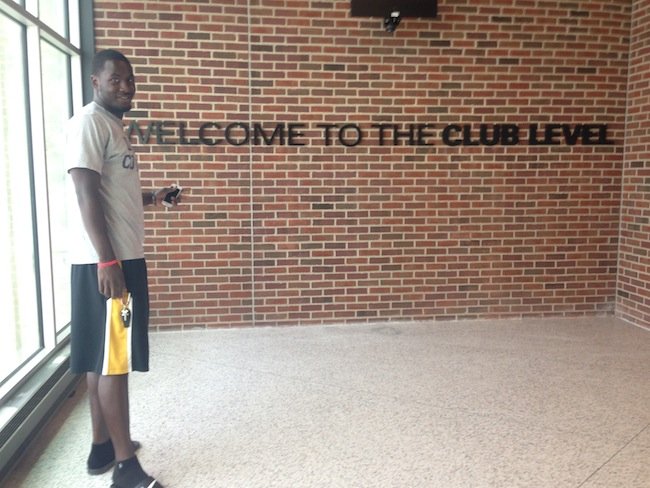 Memorial Stadium has undergone a major facelift in the past 12 months.

In addition to the renovation of the West Tower that included a complete revamping of the luxury suites and media seating, the most significant component of The Zou’s makeover is nearing completion.

At a cost of more than $45 million, 4,100 upper deck seats and 1,200 premium seats have been added to Memorial Stadium’s east side. A 23,000-square-foot indoor premium club space has also been added, along with an expanded concourse, an enhanced restroom and concession areas, a new ticket office location, more points of entry, and new field lighting.

With the expansion, the stadium’s capacity will return to 71,000 in 2014.  Capacity dropped to roughly 68,000 last season as a result of the removal of the bleachers behind the north end zone and around the north concourse.

Wide receiver Darius White and some of his teammates toured the newest addition to The Zou on August 26, and needless to say, they liked what they saw. White, tight end Jason Reese, tailback Marcus Murphy and other members of the Mizzou Football Family sample the amenities that many Mizzou fans will get to experience this season.

The new additions to The Zou will be open for fans starting August 30, when Mizzou Football takes on South Dakota State. The game starts at 2:30 p.m. and will air on ESPNU and on the radio via Tiger Network.  Mizzou fans can also watch online via ESPN.