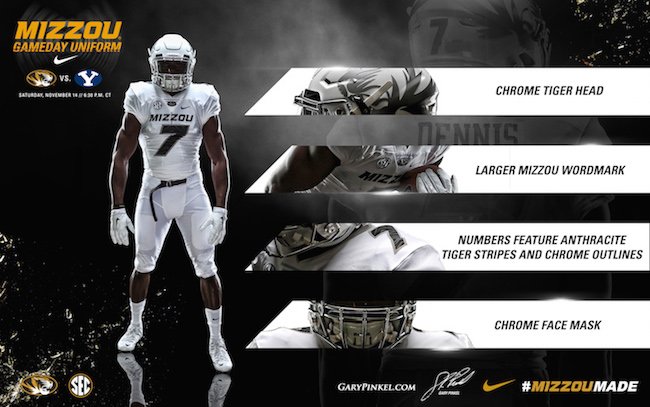 COLUMBIA, Mo. – It all started back in 2007 when Mizzou Football wore white jerseys and gold pants as QB Chase Daniel led No. 4 Mizzou to a 36-28 victory over No. 2 Kansas at Arrowhead Stadium. That began a tradition that led to gold jerseys in 2008 and Nike Beast Mode uniforms in 2009. With Mizzou returning to Arrowhead for the first time since 2011 this Saturday against BYU, the Tigers will once again don special Nike uniforms to continue the tradition.

Prior to the season, Mizzou Assistant Athletic Director for Equipment Don Barnes came up with a uniform concept that Mizzou had never worn: a white base jersey-pant combo with black numbers and an anthracite Tiger stripe overlay  accompanied by a white helmet equipped with a chrome secondary Tiger logo and facemask. The uniform combination will also feature gloves with the anthracite Tiger stripe pattern. Sticking with tradition, Barnes and the entire Football staff decided that Arrowhead would be the perfect place to unveil the new uniform combination.  Below is a look at the history of special uniforms worn at Arrowhead.

2007: In what was arguably the biggest game for Mizzou in the Big 12 era, Gary Pinkel and company decided to bring back a uniform combo that had been a fan favorite for years. Mizzou had not worn the gold-pant, white-jersey combo in years despite fans calling for Coach Pinkel to bring the look back. With the eyes of the nation on Arrowhead for a top-five showdown that November night in 2007, Mizzou surprised the fans with the gold pants and the rest was history. Mizzou went on to defeat Kansas, 36-28, and earn the No. 1 ranking in the country the following week.

2008: One year removed from surprising fans with the white-jersey, gold-pant look, Mizzou flipped the script and unveiled gold jerseys for the first time in years. The uniforms garnered such high praise from Mizzou fans that they were arguably the inspiration for one of the fans’ favorite current looks – gold jerseys and black pants.

2009: After the success that Mizzou Football had on the field both in 2007 and 2008, Nike chose Mizzou as one of 10 schools to wear special Pro Combat uniforms during the 2009 season. Mizzou chose to once again unveil these against Kansas at Arrowhead. Mizzou’s Pro Combat uniforms were called ‘Beast Mode’ and that moniker was embroidered on the collars of each jersey. Inspiration for the white jersey, anthracite pant and black-on-black helmet combo was the speed of a tiger and the fact that Whiteman Air Force Base in Missouri is home to many of the nation’s stealth bombers. Black-on-black helmets and pants signified that speed and stealth-like nature.

2015: Wanting to do something that had never been done at Mizzou, Barnes and his staff chose to go with this year’s look. As detailed above, the white-jersey, white-pant look is accompanied by a helmet with a chrome secondary Tiger logo and chrome face masks. The jerseys feature black numbers with an anthracite Tiger stripe overlay outlined in chrome.

The Whiteout set for Saturday is one of four uniform themes Mizzou put into place for the season, including the Tigers Stripe (now in its second season) and the annual #GoldRush and #Blackout games. The monochromatic uniform look will also be featured during Mizzou’s game vs. Tennessee next Saturday (Nov. 21) at Memorial Stadium. As in year’s past, the final home game of the season will serve as the team’s #Blackout game in which the Tigers will don all-black uniforms. The complete uniform combination for that game will be released Friday, Nov. 20.