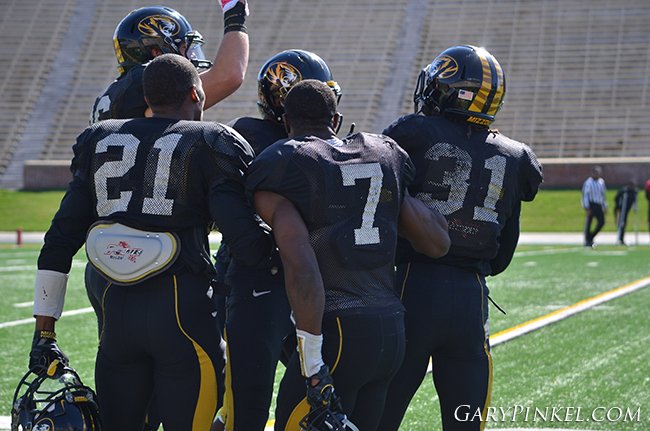 was a beautiful day for football at Mizzou’s first scrimmage of the spring, and the defense was ready to get after it.

Mizzou defensive lineman Charles Harris picked up the first of a few turnovers for the defense as he picked off quarterback Eddie Printz pressed up against the goal line and walked in for a touchdown. Safety Thomas Wilson and cornerback Aarion Penton also grabbed interceptions on the day.

The offense was able to make some plays of its own, including a nice pass from quarterback Maty Mauk to receiver J’mon Moore.

Several young Mizzou players got a chance to make some plays at the first spring scrimmage. Sophomore quarterback Marvin Zanders was one of these, as he hooked up with sophomore walk-on Marcell Kellum for a 36-yard gain leading to a 30-yard Andrew Baggett field goal.

The Mizzou Football Black and Gold Spring Game is Saturday, April 18 at 4:00pm in The ZOU.