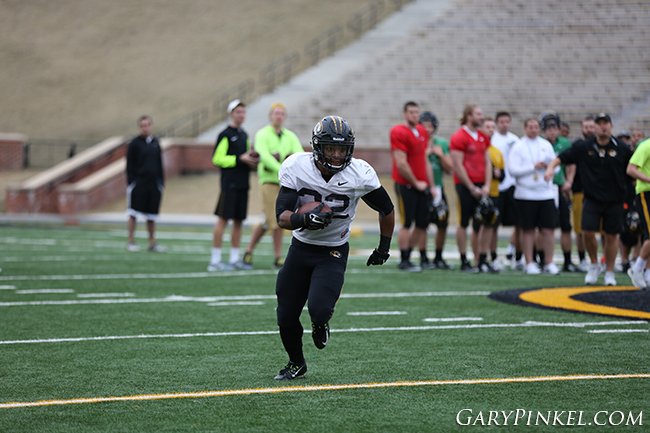 href=”https://www.gpmade.org/current-players/russel-hansbrough/” target=”_blank”>Russell Hansbrough, a 5-9, 195-pound tailback from Arlington, Texas, heads into spring football as Mizzou’s returning lead rusher and hopes to make a statement in 2015 after an impressive 2014 season. His 1,084 total yards in 2014 was among the best in the SEC while having a couple of monster individual performances along the way. Hansbrough rushed for 91 yards against Arkansas, 62 of which came in the 4th quarter as Mizzou rallied to win 28-21. Hansbrough also rushed for a career best 199 yards and recorded two touchdowns against Texas A&M in 2014.

In addition to having a great individual year as Mizzou’s top rusher, Russell hopes to take on a new role as a leader in 2015. Hansbrough follows two of Mizzou Football’s great tailbacks and leaders in Henry Josey and Marcus Murphy. Hanbrough’s hard work on the field as well of his maturity off of it will help him set the right example for the younger tailbacks of the Mizzou family this season.

You can catch Hansbrough and the rest of the Mizzou Football Family at the Black and Gold Spring Game on Saturday, April 18 at 4:00pm.