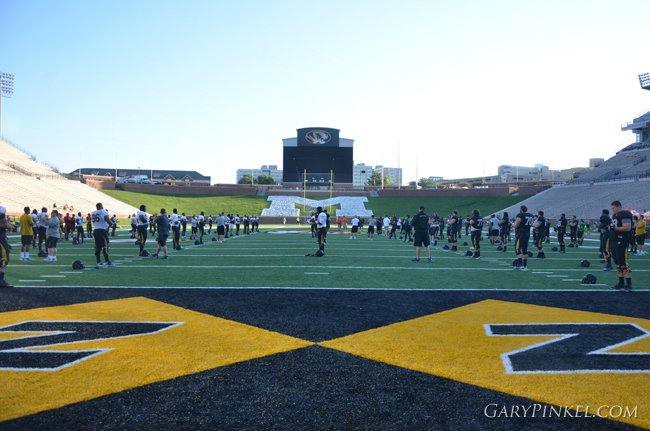 The Mizzou Football team held its first scrimmage of fall camp on August 12 at The ZOU, and the defense came away victorious 14-12.

The Tigers’ first touchdown of the day came via a 24-yard rush by junior running back Tyler Hunt, capping off an impressive 76-yard drive led by starting quarterback Maty Mauk.

Mauk threw a touchdown of his own later in the game, a 28-yard strike to senior wide out Jimmie Hunt.  Mauk finished the game with an impressive 194 yards on 16 of 24 passing with one interception and a touchdown.

Freshman tailback Trevon Walters led the way for the Tigers on the ground, picking up 93 yards on 14 carries. Starting tailback Russell Hansbrough also had a nice day, rushing for 49 yards on 5 carries.

Starting wide receiver Bud Sasser did his part in the passing game, catching four passes for a team-high 64 yards.

But it was the defense’s day. Junior defensive back Kenya Dennis and freshman safety Thomas Wilson each picked off a pass. Sophomore defensive tackle Rickey Hatley also racked up a turnover for the Tigers’ D by recovering a fumble.

The defense sacked Mizzou quarterbacks five times and finished the game with eight tackles behind the line of scrimmage.

Mizzou Football will hold its next scrimmage on Saturday, August 16.