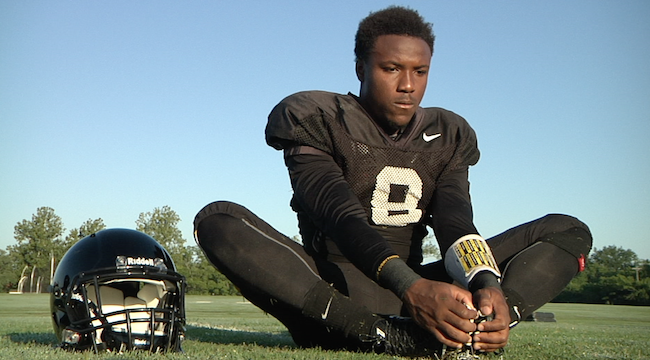 Meet Thomas Wilson, an Atlanta, Georgia native who has made his way to the great state of Missouri to bleed black and gold proudly in the SEC. A graduate of Buford High School, Wilson is ranked the No. 27 athlete in the nation by Rivals.com. The 5’11” safety committed to Missouri over numerous offers, including Arizona, Tennessee, Duke, and UCF.

Now, as a member of the Mizzou Football family, Wilson reflects on his time in The ZOU thus far and what the biggest differences are between fall camp and high school football.

Wilson has not just evaluated the differences between high school and college football, but he has also been taking mental notes on ways to improve in fall camp and for the upcoming season.

For camp it is “Just learning the plays and playing fast.” And for the upcoming season, Wilson noted, “It’s learning the calls, really.”

The team’s first scrimmage showed not only team improvement and preparation, but it also reassured Wilson as he enters his new season of life in SEC college football.

“Don’t make the game confusing because it’s just football at the end of the day.”

The Mizzou Tigers will have their season opener at The ZOU against South Dakota State on August 30. Kickoff is at 2:30 p.m. CT.