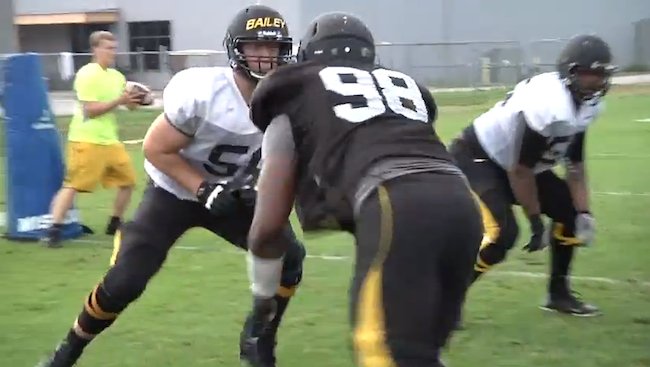 Meet freshman offensive lineman Sam Bailey from Lamar, Mo., who is thrilled to be playing college football in his home state.

“It’s the only place that I could ever see myself playing,” Bailey says. “I’m a true Missouri boy, born and raised in Missouri. It’s just the place I wanted to go.”

Aside from practicing with the rest of the team, Bailey is working on bulking up before the 2014 season.

“As you can see, Sam is a little lighter than most of us,” McGovern jokes. “We’re having a program out called ‘Feed Sam.’ So if any of you guys want to donate a cow or a pig, or any kind of meat to bulk him up a bit… we’d really appreciate that.”

Bailey is one of ten in-state freshmen to sign with the Mizzou Tigers for the 2014 season. He is also one of eight players from Lamar High School, coached by Bailey’s uncle, Scott Bailey, to sign with a college team. Bailey chose to play for Missouri over offers from Arkansas, Kansas State, Memphis, Tulsa and the Army.

“There’s other schools that I was considering, but I mean, it’s Mizzou,” Bailey told the Springfield News-Leader earlier this year after committing to play for Mizzou. ”If you want to play football in Missouri, Mizzou is the best place to go. I was lucky enough that they wanted me to come play for them, so there was no way I was going to say no.”

Bailey played blocking tight end and defensive end in high school but is transitioning to his new position of offensive lineman. He told the News-Leader that as high school player from a small town, his official trip to Mizzou was overwhelming.

“It’s up in big-city Columbia,” he said. “They’re taking me to restaurants, I’m trying new food and everything – big city, you know, it’s different. But I’m excited. It made me really want to be in college.”

Aside from playing high school football for Lamar, Bailey earned a state championship for track in the discus event and was a member of the school’s basketball team.