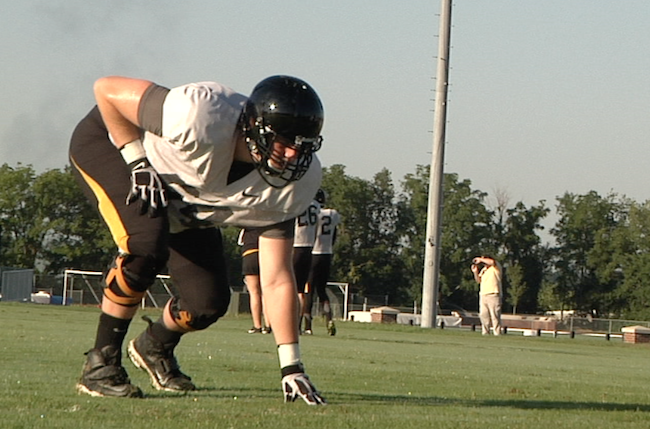 The Missouri offensive line gained a valuable asset for the upcoming 2014 football season: Paul Adams. A freshman from Bellevue, Tenn., and a graduate of Christ Presbyterian Academy, Adams has found his place as a Missouri Tiger and has grown close to his football family, both on and off the field.

Mitch Morse, a 2014 team captain and rising senior, interviewed Adams for Rookie Spotlight. Morse and Adams have been roommates during camp this summer. Through dorm life, Adams and Morse have gotten to know each other quite well. According to Morse, Adams “snores like a bear.”

Although there is a lot of joking between the two athletes, it is clear that Adams learns from Morse’s example as a senior on the team.

“Following every step that you have taken so far has gotten to me where I am.” Adams said to Morse. “I couldn’t imagine dorm life without you.”

Adams, who has plowed through 10 practices at camp and has played in the first scrimmage, witnessed true leadership in the upperclassmen players, who have encouraged him to be the best Tiger he can be on the field.

“It makes me want to push myself every single day and just to keep up with the intensity because I know it is going to pay off in the end.”

Adams’ experience with the offensive line is nothing short of sound leadership and great examples. The upper-class offensive linemen have helped Adams transition from high school to the collegiate level in specific ways.

“While watching film, I listen to what the upperclassmen have to say,” Adams said. “They have great advice.”

He noted the biggest difference between high school football to his first 10 practices of camp. “The intensity. It’s definitely a lot faster than high school.”

Morse praised Adams for his hard work during the last 10 practices in The ZOU. “I’ve seen you make excellent plays,” Morse said. “And I feel like you are acclimating brilliantly to Mizzou and the way we practice at this collegiate level.”

Adams has noticed the healthy mindset and lifestyle that his fellow offensive linemen live by as college athletes. “Sometimes we have fun, but when it is time to work, we work.”

See the offensive line and the rest of the Mizzou Tigers take on South Dakota State on August 30 at The ZOU. Kickoff is at 2:30 p.m. CT.