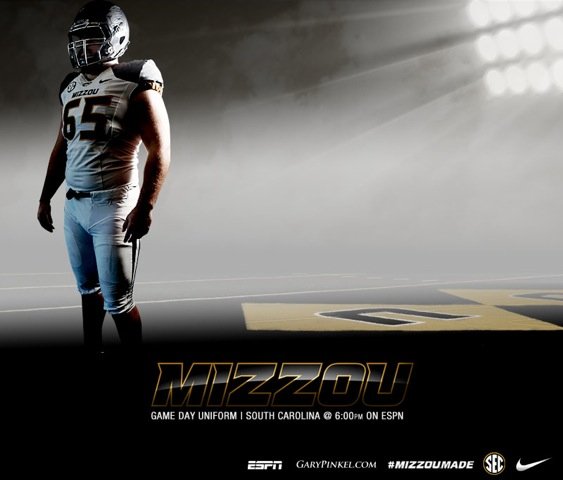 Mizzou Football will face off against South Carolina in the Nike uniform combination of high-performance white Elite jerseys with black numbers and white pants on Saturday, September 27 in Columbia, South Carolina.

There were over 1,200 entries in this week’s fan voting contest to predict Mizzou Football’s uniform for Saturday’s game. The helmet Mizzou Football will wear was option three in the contest: matte black with a chrome tiger head.

This marks the first time Mizzou Football has worn this helmet since September 2013.

The sleek jerseys feature anthracite coloring on the shoulders and tiger-stripe accents on the sleeves.

The white Nike pants are ultra-lightweight and have anthracite accents on the sides.

One lucky voter who guessed the correct uniform combination will win two tickets to Truman’s Terrace. Stay tuned to GaryPinkel.com for the announcement of the winner.

Kickoff for the Mizzou-South Carolina game is set for 6 p.m. CT, on ESPN. Mizzou Football will post live updates on Twitter, Instagram, and Facebook throughout the game, and fans can also listen in via Tiger Network radio affiliates.