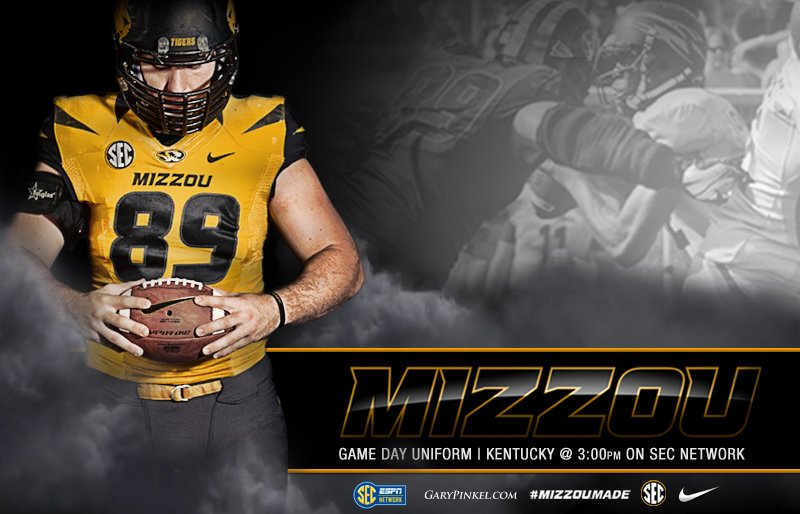 “Those who win in November will be remembered.”

The Mizzou Football family will keep this quote shared with them by head coach Gary Pinkel in mind as they kick off in the first game of the month on Saturday, November 1, in a high-performance Nike uniform combination.

When the Mizzou Football seniors decided on the uniforms for each game of the season back in August, they chose the gold jerseys and lightweight anthracite grey pants for their matchup against the Kentucky Wildcats. The fresh look will be completed with the alternative matte black helmet with the gold tiger head.

“It‘s a unique combination,” says senior defensive lineman Matt Hoch. “Usually you’ll see black on black or gold on black so I really like it. It’s a different look and something that I think will appeal to the fans.”

Since the new Nike uniforms were revealed in 2012, Mizzou Football has had a variety of fierce combinations, and the players love wearing these uniforms just as much as the fans love seeing them.

Kickoff against Mizzou Football’s SEC division rival Kentucky is set for 3 p.m. CT this Saturday, November 1in The ZOU. The game will be broadcast on the SEC Network. Fans can follow Mizzou Football on Twitter, Instagram, and Facebook and listen in via Tiger Network radio affiliates for updates throughout the game.