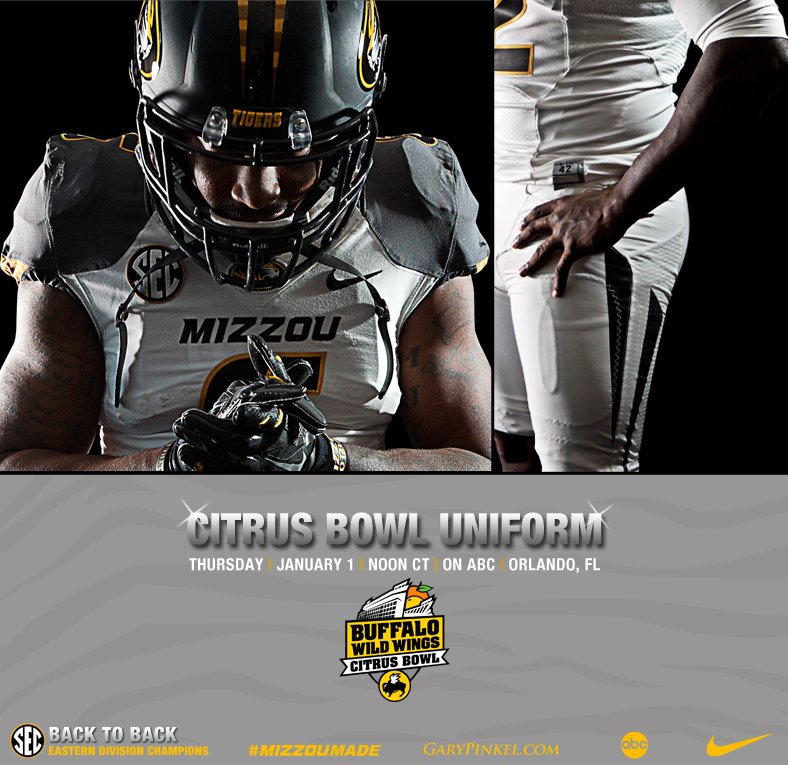 Mizzou Football will take on Minnesota this Thursday, January 1 in the 2015 Buffalo Wild Wings Citrus Bowl. The Tigers will celebrate their roots by taking the field in a classic road game uniform — white jerseys with anthracite and tiger stripe accents and the white ultra-lightweight pants. The look will be topped off with the matte black helmet with the traditional tiger head logo and tiger stripe down the middle.

Mizzou earned a trip to Orlando, Florida to play in the Buffalo Wild Wings Citrus Bowl coming off its second straight SEC East Division Championship. The bowl committee chose Mizzou over many other SEC programs for the game. Mizzou Football Head Coach Gary Pinkel feels that this is an opportunity for the Tigers to establish their name in Florida to increase recruiting.

“I think what sells your program the most is when people can come on and walk out here and watch us practice and watch us teach, watch us coach,” Pinkel said. “What sells our program is when our Florida kids — we have about a dozen now — go up to Columbia and come back to their high school coaches and let them know that Mizzou is a great place.”

Mizzou Football will take on Minnesota on Thursday, January 1 in Orlando, Florida in the newly reconstructed Citrus Bowl. Kickoff is set for 12 p.m. CT and on ABC. Fans can follow Mizzou Football on Twitter, Instagram, and Facebook and listen in via Tiger Network radio affiliates for updates throughout the game.

The Quest for Consistency
Scroll to top