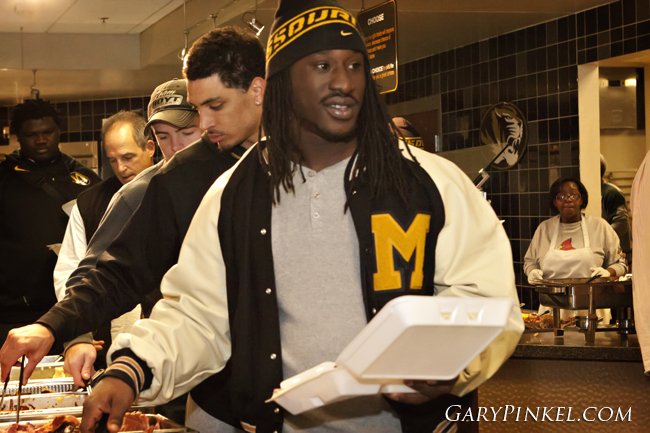 From inner city St. Louis to team captain of the Mizzou Football team, Markus Golden has come a long way.

The senior defensive lineman grew up in inner city St. Louis, which proved challenging. Luckily he had the support of his mom, dad and grandmother.

“I can’t say it was hard because I know a lot of people had it harder, but it wasn’t the best,” Golden says. “But we worked with it, and my mom made it comfortable for us.”

Golden began playing youth football at the Matthews-Dickey Boys Club and then went on to star as a running back on the Afton High School football team. Upon graduation, he headed to Hutchinson Community College in Hutchinson, Kan. Naturally, he joined the football team there and found success in a new position: Defensive end.

“It was kind of hard being away from home for the first time,” Golden remembers. “There were days where I was at Hutch, and I was like, ‘Oh my God, is it worth it?’”

Golden felt relieved when he was finally able to transfer to Mizzou and join the football team in 2012.

“That first day being out here, it was just a blessing,” Golden says. “Just to be out here just for my family and just to show people that if you put your mind to it, you can achieve all your goals. Just to actually be on the Mizzou field, it was like a dream come true.”

Golden adjusted to playing for the Tigers during the 2012 season and started showing signs of success early on.

“Physical, aggressive and fast,” defensive lineman Shane Ray says of Golden. “He’s a 260-pound guy. He can move, and he just disrupts everything.”

“Passion, desire, perseverance—he never quits,” Hoch says. “He’s got one of the best motors on the team.”

After a breakout junior season in 2013, Golden got the attention of the National Football League. All signs indicated that he could have left college early and gone straight to the pros, but he decided to remain a Mizzou Tiger for his senior season.

“When I first got here, I was the guy saying, ‘If I get a chance to go to the NFL, I’m going to go,’” Golden says. “But as I got up here and saw the family environment and learned so much from these coaches, that’s what it’s all about: Being around my family. My team is my family.”

Although the Mizzou Football Family is extremely important to Golden, his main reason for staying is his education.

“I want to be the first in my family to get a degree,” Golden says. “I’ll be able to tell my brothers and everybody else, ‘I got a degree.’”

Golden’s experiences along the way have made him a better player.

“Really when you look back on it, all these great moves that he had as a tailback really helped him to be a good pass rusher,” Mizzou defensive line coach Craig Kuligowski says.

Golden was voted to be one of four team captains for his senior season, which demonstrates the respect he’s earned from his teammates.

“If you would have told me when I was a freshman at Hutchinson that I’d be a captain at Mizzou, I would have laughed,” Golden says. Golden and the Mizzou Tigers will faceoff against South Dakota State in the 2014 season opener at The ZOU. Kickoff is set for 2:30 p.m. CT.