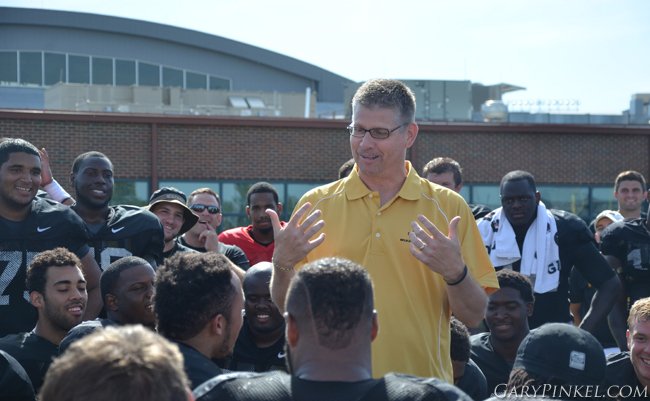 Mizzou graduate and ESPN sportscaster John Anderson paid Mizzou football a visit during fall camp as the team prepares for the upcoming season.

Anderson, an anchor for SportsCenter, was a captain of the track team during his days at Mizzou.

“[I wasn’t] a track star, at all,” Anderson said, regarding his athletic career. “They didn’t even have a track when I was here. I ran around for four years.”

The 2012 Bill Teegins Oklahoma Sportscaster of the year then got down to business—the reason he took a few moments away from the SEC Network’s debut to speak to the team.

“I am hugely proud of this team,” he said. “The last four years that I was in school here in Missouri….we won 12 games. In four years. So to see 12 games in one year was phenomenal.”

Anderson talked directly to Mizzou defensive lineman Shane Ray, whom he has admired since the junior’s timely scoop and score that sealed the team’s win over Oklahoma State in the Cotton Bowl.

“My wife is from Oklahoma State….but they’re not on our schedule anymore, so I have a lifetime of bragging rights, near as I can tell, courtesy of you,” Anderson said as he shook Ray’s hand.

Anderson threw in a little bit of sage wisdom to urge the players to make the right decisions.

“You will always come back to this place; [it’s] special to you, and if it’s not now it will be eventually,” he said. “We [as alumni] come back to watch you guys because you are our connection to the university.”

Anderson explained why the football team’s role in the community is so important, and, that being the case, why its players carry so much responsibility.

“I don’t want to get down on Dr. [Pat] Ivey—I’m glad that you lift weights and all of that—but in the end, smart wins,” he said. “It will win on Saturdays, and it’ll win once you graduate, as you go away from here.”

Anderson also shared some thought-provoking concepts that his former coach once shared with him.

“Whatever your coaches ask you to do, do that,” Anderson said. “If you can go out there and play somewhere else that they ask you to play, that’s great.

Don’t leave it on the bus.

“Take this speech of mine, and you’re going to have to parcel it out over the next 16 days so that you’re still fired up when you have to go out and play because nothing keeps that long,” he said.

Be loose as a goose, and twice as shifty.

“I try to do it every day, but until I saw you [guys] twerking yesterday, I didn’t know what that means,” Anderson joked. “But I think I do now.”

Anderson thanked the Mizzou Football Family one last time before Coach Pinkel presented him with a souvenir Mizzou helmet.

“As someone who works in the media, I thank you for making the product,” he said.

Mizzou will make its debut on the brand-new SEC Network on September 13 against the University of Central Florida Knights. The next scrimmage of fall camp is scheduled for Saturday, August 16.