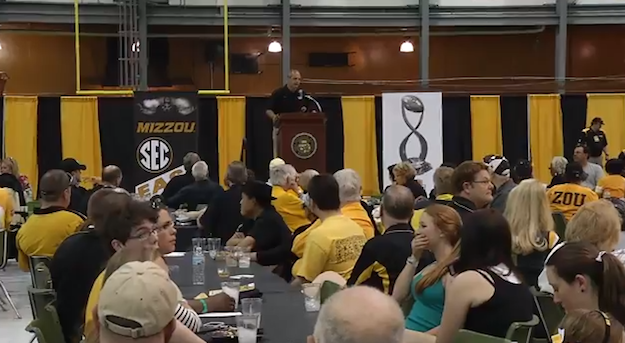 Mizzou has always had a long and storied tradition of acquiring and fostering top football talent. The team’s commitment to excellence in this area is unquestioned. That’s why each year, just before the annual Black and Gold spring game, hundreds of former players are welcomed back to The ZOU via the Mizzou Football Alumni Reunion, an event designed to are honor and recognize some of the biggest and brightest True Sons of Mizzou for their contributions and sacrifices to the program.

Like any reunion, this year’s edition proved to be a nostalgic one.

“You kind of just see guys, and you pick up where you left off,” says Brad Madison, a former defensive lineman for Mizzou. “That’s one of the nice things about playing football: You have such a special bond, and you’re away for so long that you just pick up right where you left off when you see them.”

Players also feel privileged and proud to meet former players who played the same positions that they did and form with them some of those same bonds that they share with their fellow teammates.

“With tradition comes responsibility, and so it’s really cool to meet some of the guys that have worn your number many years before you,” says Justin Britt, a Mizzou Made offensive lineman. “Then you kind of step into their shoes and see how they feel.”

Players were appreciative of the coaching staff and athletic department for sponsoring the event and said the reason that they are able to reminisce with each other about their playing days as if they were still in them is due to the fact that they get to see each other each year via this event.

It was evident that the players enjoyed themselves catching up with old friends and making new ones as they prepared to continue on their journey of preparation for the 2014 football season.