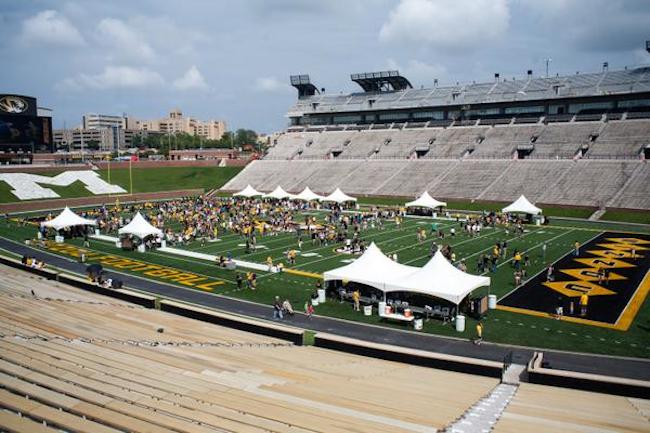 The ZOU was filled with happy, smiling fans this weekend, as they met and posed for photos with their favorite Mizzou Tiger football players.

The Mizzou Department of Athletics and the Mizzou Football Team held the 12th annual Fan Appreciation Day on Sunday, August 10 at The ZOU. The free event gave young fans and their families a chance to walk on the field and meet their favorite Mizzou Football players and coaches.

“Having the chance to do this was just a super great opportunity for the fans,” Steve Davidson, a Mizzou fan said during Sunday’s event. “I’ve never had the opportunity to do this, so we took advantage of it today.”

The event was enjoyable for players too, who signed Mizzou posters, hats and balls while chatting with young fans.

“Today was great, you know, just giving back to the fans is what we look forward to today, especially the young kids and families that come in and support us throughout the year, which is big for us,” offensive lineman Anthony Gatti said during Sunday’s event.

The Mizzou Cheerleaders and Golden Girls took part in the day as well, meeting and shaking hands with their little fans. For boys, girls and players alike, the event was a kickoff to the 2014 season.

“Being out here with some of these people – it makes their week, especially the little kids,” offensive lineman Stephen Carberry said Sunday. “I love seeing the smile on the face when you sign their poster, their football or their hat. It takes me back to when I was a little kid and I used to do this kind of stuff with pro-teams and college teams in the area.“

Fan Appreciation Day comes less than a month ahead of the August 30 season opener against the South Dakota State Jackrabbits. It will be a home game played at The ZOU with kickoff scheduled for 2:30 p.m. CT. With just weeks to go before the start of the 2014 football season, fans are getting excited.

“For them to be able to put a name with a face, to shake a player’s hand, say, ‘Hey’ to them, exchange a few pleasantries, I think is going to enhance their appreciation when the Mizzou players come out this fall and start doing wonderful things on the football field,“ Mizzou fan Pat Hayes said at Sunday’s event.

“I think my kids, as they are in the stands, they are going to be able to look out and say, ‘Aw! Remember when we met so-and-so?!’ and they are going to appreciate even more the opportunity to see them put on a wonderful performance.”