Listen to Coach Gary Pinkel’s weekly radio show, “Tiger Talk,” and you’ll hear the same thing from every player. Host Jim Kelly asks each one of them, “Why’d you come to Mizzou?”

Because of the family atmosphere.

“We work on relationships, we work on closeness, we work on being honest with one another, so this family atmosphere just doesn’t happen because it’s a cool place to be around,” Pinkel said. “It’s because we work at it. You have to embrace it and know how critically important it is for your success. Like any family, it’s an ongoing process.”

Every family needs a strong father figure, and coach Pinkel embraces that role for the Tigers. For a parent, sending a child off to college is a process that is filled with uncertainty. Pinkel makes it a priority to alleviate that doubt and assure every parent that when their child signs on the dotted line, they’ll be in good hands.

“I tell the recruit and mom and dad that if you give your son to us, there’s a design in place: we have a plan for absolutely everything,” said Pinkel. “We will help him when he hits the bumps in the road and the tough times, because we have a family of people here that are going to be there to help him and support him as he achieves.” 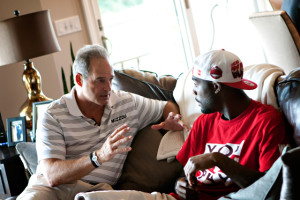 That master plan is outlined and detailed in a book of life lessons titled We Are Mizzou. Those lessons, ranging from being disciplined, responsible and accountable to being respectful to all people regardless of gender, race and religion, are meant to be applied on and off the field to develop great players and exemplary human beings.

Taken from that book are three words that are posted in every room of Mizzou’s football facilities: “Attitude” and “No Excuses.”

The key to success, according to Pinkel, is a great attitude. In order to maintain that attitude, Mizzou players are taught to be encouragers, not discouragers. 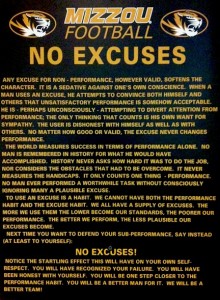 “No Excuses” is a motto that the Tigers live by because they know that accountability is paramount to growth as athletes and as people. From the second they arrive at the University of Missouri, the student-athletes learn that excuses and success are simply not compatible. Pinkel preaches to his team that, once they take responsibility for their actions, their self esteem will grow, which will in turn put them in the best possible position to triumph over everything that life throws at them.

Before the players leave the locker room to face those challenges, they pass two signs.

The first says, “Protect the family.”

“We’ve got to protect one another,” Pinkel said. “What you say, what you do and how you act is a direct reflection on this football family. That means we have to say and do the right things and be very respectful of everyone that we’re in contact with.”

“We have to be always 100 percent honest with one another if we’re going to have the kind of family that we want to have here at Mizzou,” Pinkel said.

Next is being respectful of women. Coach Pinkel and the athletic department spend a lot of time with his players on this topic, and are very thorough in making them understand that, as men, it is their responsibility to treat all women with the upmost courtesy, class and regard.

The third core value disallows drug use in the football family. Mizzou is one of only a handful of schools in the country that drug tests every week. The tests aren’t done to get student-athletes in trouble. Rather, they’re to keep them out of it. 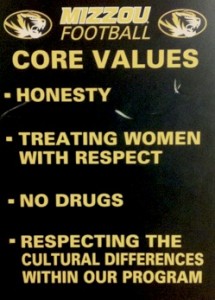 Pinkel uses the random tests to deter his players because, simply put, drugs hinder development. The Mizzou football program’s primary goal is to develop young men for the future, and drugs are nothing but a roadblock on their drive toward success.

And lastly, but arguably most importantly, Pinkel preaches the importance of respecting the cultural differences of every single member of the Mizzou football family. Each player on the team comes from a unique background. Some are black, some are white. Some are religious, some are not. Some were raised by their parents, and others were raised by their aunt, uncle, grandmother or even their high school coach. Regardless of where they come from, all 131 players treat each other like brothers, with love and respect, because they are one family with one goal.

They are One Mizzou.