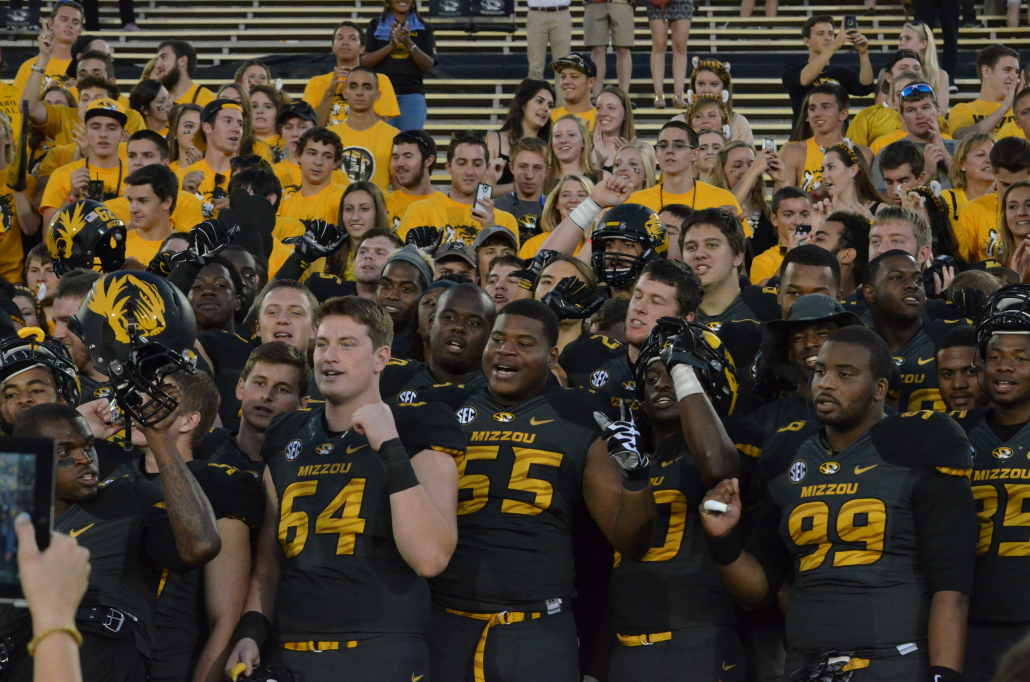 Mizzou Football dominated the line of scrimmage, rushing for a season-best 244 yards, in the team’s 24-14 Homecoming win over Vanderbilt in The ZOU.

Andrew Baggett capped off a 44-yard opening drive with a 37-yard field goal to put Mizzou Football on top 3-0 early in the first quarter. The Tigers extended their lead to 10-0 in the second quarter on a 10-yard run by Russell Hansbrough, which completed a 12-play 77-yard drive. Mizzou Football controlled the clock early with their effective rushing game, taking up 9:17 between the two scoring drives.

The ground attack was paced by a collective effort from Hansbrough, Marcus Murphy and Maty Mauk, who each averaged over 4.5 yards per carry. Murphy ran 16 times for 93 yards and Hansbrough nabbed 87 yards and a touchdown on 19 carries, marking the first time in 15 years that Mizzou Football has had two running backs with at least 85 rushing yards against a Football Bowl Subdivision opponent. Mauk complemented the backfield duo with 67 yards of his own on seven quarterback keepers.

Mauk and Bud Sasser were dynamic in Saturday’s game. Twice Vanderbilt pulled within three points, and twice Sasser and Mauk answered with touchdown passes. The first came with 2:27 left in the third quarter, when the quarterback hit his senior wide receiver on a crossing pattern at the 10. Sasser took it from there, weaving through Vanderbilt defenders to find his way into the end zone and make the score 17-7.

When the Commodores made it 17-14 with 6:53 left in the game, the Tigers hit the ground for another long drive. Following a four-yard sideline screen to freshman Nate Brown, Mizzou Football ran the ball on seven of the next eight plays before Mauk, on second and 15, connected with Sasser on a beautiful fade in the left corner of the end zone for the game’s final score.

On defense, Mizzou Football was stifling, holding the Commodores to just 240 yards of total offense. The defensive line allowed Vanderbilt to gain just 44 yards on the ground on 27 attempts, their lowest rushing output of the season. Matt Hoch led the charge with six total tackles, 2.5 for loss, and 1.5 sacks. Donavin Newsom, Harold Brantley, Markus Golden and Charles Harris each recorded a backfield takedown as well. Brantley, who entered the game ranked second among SEC defensive tackles in sacks, took the quarterback down behind the line of scrimmage for the fourth straight game.

Braylon Webb also continued his outstanding play as he corralled his third interception in two games when he picked off the Vanderbilt quarterback on the Commodores’ first possession of the second half.

With the victory, Mizzou Football…

The Mizzou Football family completes their two-game home stand with a 3 p.m. CT kick next Saturday, November 1, when the Tigers welcome Kentucky to The ZOU. SEC Nation, the SEC Network’s traveling pregame show, will be live from Francis Quadrangle at 9 a.m.

Bid on Homecoming Visor for Dream Factory
Scroll to top