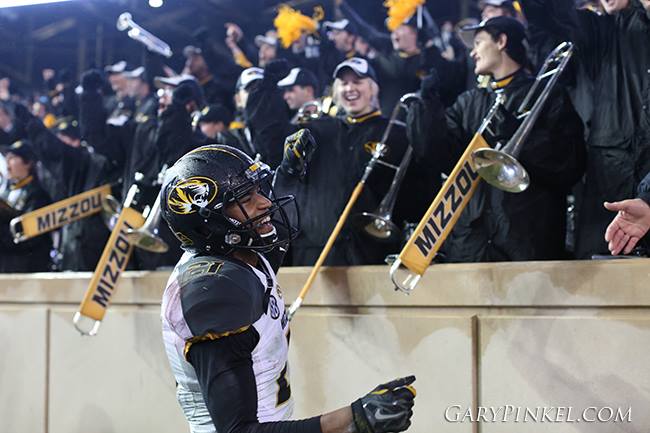 Behind its best offensive output of the season and a late goal line stand, Mizzou Football defeated Texas A&M 34-27 on November 15 to remain atop the SEC East standings.

Mizzou (8-2, 5-1 SEC) outscored Texas A&M 28-7 in the third quarter to erase a seven-point halftime deficit and take a two-touchdown lead into the game’s final quarter.

The Aggies pulled within one score and were driving with a chance to tie with less than three minutes left on the clock when the Mizzou defense put the clamps down. Markus Golden stuffed the Texas A&M run on third-and-one from the Mizzou two-yard line to force a crucial fourth down, and then Matt Hoch, Braylon Webb, and Duron Singleton snuffed out a misdirection screen, swarming the Aggie receiver for a loss of one to give the ball back to the Mizzou offense.

A 10-yard completion to Jimmie Hunt on second-and-11 from their own endzone followed by a two-yard run by Marcus Murphy to move the chains sealed the victory for the Tigers.

had a career day, rushing for 199 yards and two touchdowns. His first score came early in the third quarter with Mizzou trailing 20-13. The running back took the handoff on the Mizzou side of the 50, hit the hole up the middle, and ran 49 yards untouched for the score. On Mizzou’s very next drive, Hansbrough turned a halfback sweep on third-and-one into a 45-yard touchdown scamper to give the Tigers a 27-20 lead.

Freshman Ish Witter made it 21 unanswered points for Mizzou when he ran it in from 16 yards out with just under a minute left in the third to make it 34-20.

In all, the Mizzou offense gained 587 yards and dominated the time of possession game, controlling the ball for almost two-thirds of the game’s 60 minutes.

Maty Mauk continued his strong play, throwing for 252 yards and a touchdown. Texas natives Darius White and Bud Sasser each had six receptions in their homecoming, and White hauled in Mauk’s touchdown toss, a 16-yard fade on the Tiger’s first possession of the second half.

On defense, Mizzou was strong once again, holding Texas A&M to just 341 yards of total offense. It was the sixth straight game that the defensive unit has held its opponent to under 380 yards. 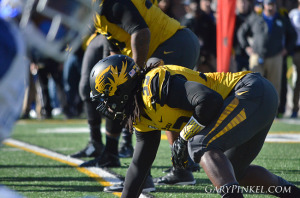 Markus Golden and Shane Ray put pressure on the Aggie offense all game, as each had two tackles for loss. Both of Golden’s backfield tackles came in the form of a sack, and Ray added a quarterback takedown of his own to give him 13 on the season, extending his school record. On the year, Mizzou ranks first in the SEC in sacks, second in tackles for loss, and first in total yards lost on tackles behind the line of scrimmage.

On special teams, Andrew Baggett kept the Tigers in it in the first half, nailing field goals of 38 and 35 yards. Baggett currently ranks fourth all-time on Mizzou’s all-time scoring list with 264 career points and is just six points from matching former Mizzou standout placekicker and 2009 All-American Grant Ressel.

Mizzou travels to Knoxville, Tennessee, next to take on the Volunteers. Kickoff is scheduled for 6:30 p.m. CT on November 22. Mizzou Football posts live updates on Twitter, Instagram, and Facebook throughout the games, and fans can also listen in via Tiger Network radio affiliates.