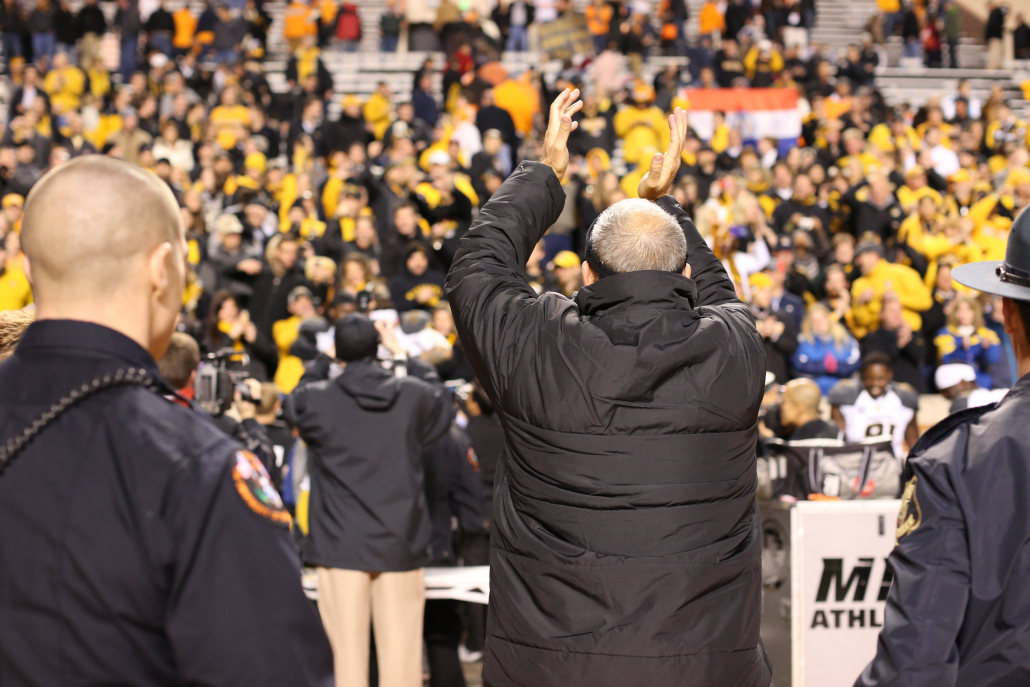 Mizzou Football (9-2, 6-1 SEC) earned a 29-21 road victory over the University of Tennessee at Neyland Stadium on Saturday night to extend its winning streak to five games and remain atop the SEC East standings.

The game also marks the 10th consecutive win on the road for the Mizzou Football, breaking the school record established in the team’s 1978 and 1980 seasons. Mizzou Football was perfect away from home last season, and are now undefeated in road games since 2012. The 10-game road win streak stands as the third-longest active streak in the nation.

Mizzou Football’s defense was superb yet again, holding Tennessee to just 279 yards of total offense and one offensive touchdown. The Tigers allowed only two drives of over 40 yards the entire game, and brought the quarterback down behind the line six times.

Markus Golden led the charge with two sacks. Josh Augusta and Lucas Vincent each had one, and Shane Ray, Harold Brantley, Michael Scherer and Ian Simon each contributed half a sack. As a unit, the Mizzou defense leads the SEC with 40 sacks on the season. Individually, Ray is first in the conference with 14 total sacks, while Golden’s 9 quarterback takedowns rank fifth in the league.

Mizzou also forced two crucial turnovers on consecutive Tennessee possessions in the second half. The first came with under four minutes left in the third quarter. On the first play of the drive, Augusta barreled through the line, sacked the quarterback from behind and knocked the ball loose. Though a bounce kept the ball with the Volunteers, one play later, Augusta ran the quarterback down again, forced another fumble, and Golden pounced on it to give the ball back to the Tigers. On Tennessee’s next possession, Kenya Dennis halted a potential scoring drive when he snagged an interception inside the Mizzou red zone.

Since the beginning of conference play, the Mizzou Football defense has been among the most effective in the country. The Tigers rank second in the SEC in total defense with 302.8 yards per game and third in scoring defense with 19.9 points per game in conference games. Mizzou hasn’t surrendered more than 380 yards in a game through its seven league contests.

Offensively, Mizzou executed a balanced attack. Maty Mauk threw for 230 yards and two scores, and the Tiger run game combined for 180 yards on the ground.

Marcus Murphy started the scoring with a one-yard plunge up the middle on the game’s opening drive to cap off a 12-play, 75-yard march. The shifty speedster found the end zone again in the second quarter on a halfback sweep from seven yards out to put Mizzou on top 13-10.

The score was knotted at 13 until halfway through the third, when Andrew Baggett made a 43-yard field goal to give Mizzou the lead for good.

Mizzou’s final two scores came via the air in the game’s final quarter. The first came at the hands of Jimmie Hunt, who turned a 33-yard jump ball on third-and-8 into a 73-yard touchdown. One possession later, Mauk found Bud Sasser on a 13-yard fade in the end zone to extend the Mizzou lead to 29-13.

Tennessee made it an eight-point game with 1:52 left, but Mizzou was able to run the clock out and secure the win.

Mizzou finishes up the regular season this Friday at home versus Arkansas in the Battle Line Rivalry game. Kickoff is set for 1:30 p.m. on CBS. Mizzou Football posts live updates on Twitter, Instagram, and Facebook throughout the games, and fans can also listen in via Tiger Network radio affiliates.

Pack The ZOU for the Battle Line Rivalry
Scroll to top