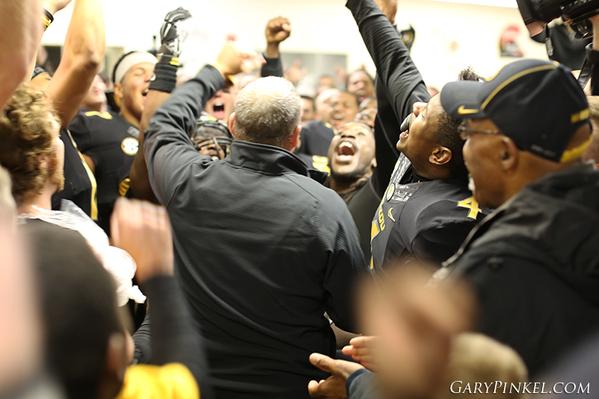 It’s the fifth division title in eight seasons for Mizzou Football, tied for the highest total in the country in that span.

Mizzou Football’s surge began at their own two-yard line with a little over a minute remaining in the third quarter, trailing 14-6. A 12-yard pass from Maty Mauk to Bud Sasser on second-and-eight got the drive rolling, and then a 44-yard connection to Jimmie Hunt on the ensuing third down put Mizzou Football on the Arkansas side of the 50. Another big completion to Sasser, this one for 28 yards, put Mizzou at the four-yard line, and then Mauk found Hunt in the end zone on a fade route to make it 14-12. On the two-point conversion attempt, Marcus Murphy took the direct snap and handed it to Sasser on a reverse, who hit fellow wide receiver Darius White with a perfect strike in the corner of the end zone to knot the score at 14.

The Mizzou defense held strong to give the ball back to the offense with 10:42 left on the clock. The Tigers then marched 73 yards, all on the ground, to the Razorback 12, and Murphy capped off the masterful drive with a 12-yard misdirection run to put Mizzou up 21-14.

Arkansas was driving for the tie when Kentrell Brothers forced a fumble and Markus Golden recovered with 2:13 to go at the Mizzou 35 to seal it and send the Tigers back to Atlanta.

Andrew Baggett nailed a career-long 52-yard field goal early in the second to make the score 7-3. He then connected from 50 yards out on the last play before the half to add another three points. With the two bombs, Baggett became the first Mizzou kicker in history to make two field goals of 50 or more yards in the same game.

Mauk completed 25 of 42 passes for 265 yards and a touchdown, with nine of those throws going to Sasser, who finished with a game-high 127 receiving yards. It was his third 100-yard game this season, and eighth with at least five catches. The senior captain is second in the SEC with 65 receptions on the year, and third in yards and touchdowns, with 904 and nine, respectively.

Arkansas came into the contest having won two straight games by a combined score of 47-0, but the Mizzou defense halted the Razorbacks’ offense, holding them to 14 points and just 288 total yards, their second lowest output of the season.

It was the fourth time that the Mizzou defense has held an SEC opponent under 300 yards. The Tigers rank second in the SEC in total defense (300.6 yards per game), and third in scoring defense (19.1 points per game) in conference games. Mizzou hasn’t allowed an SEC opponent to gain 380 yards of offense all season. Mizzou defense also held three opponents to their season-low total offense output on the year.

The win is Mizzou’s 25th November victory since 2007. Each season, Head Coach Gary Pinkel instills in his players this adage: “Those who win in November will be remembered.” The Tigers have taken it to heart as they’ve gone undefeated in November the past two seasons.

Mizzou Football will play Alabama in the SEC championship game in Atlanta next Saturday. Kickoff from the Georgia Dome is set for 3 p.m. CT on CBS. Mizzou Football posts live updates on Twitter, Instagram, and Facebook throughout the games, and fans can also listen in via Tiger Network radio affiliates.