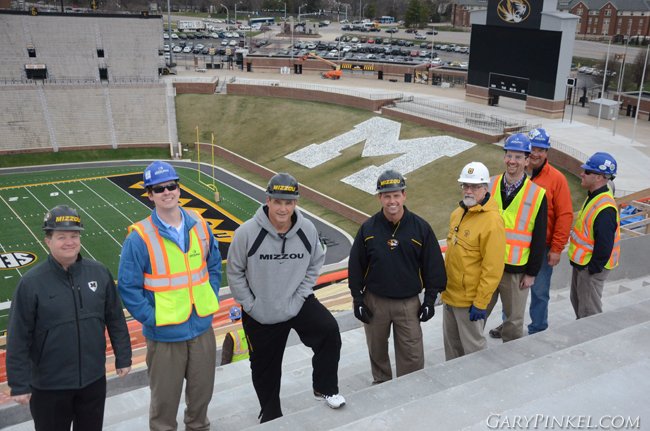 Sporting a black and gold hard hat, Head Coach Gary Pinkel toured the construction site on the east site of The ZOU Friday.

A group of construction workers gave Pinkel a special tour of the east side expansion that is still a work in progress. Pinkel said he was impressed with both the work the construction team has done as well as their attitude toward Mizzou.

“It’s amazing how much pride they have in Mizzou Football and in Mizzou,” he said Friday.

The new addition to The ZOU still needs a lot of work, but it’s already apparent how impressive the luxury section will be. Pinkel admired the floor to ceiling glass windows that face the Hearnes Center.

“The design of it, it’s going to be so fan-friendly,” he said. “That’s very important nowadays to do that.”

The expansion will provide seating that will allow fans to see the game from the highest altitude yet in Mizzou Football history. As Pinkel toured the new stadium seating, he marveled at the shear enormity of the addition.

“It’s pretty mind-boggling to think that you can construct something of this magnitude,” he said.

The east side expansion will open this fall, just in time for the 2014 season and will include about 4,200 seats on the upper deck.

Find more updates on the expansion at The ZOU here.