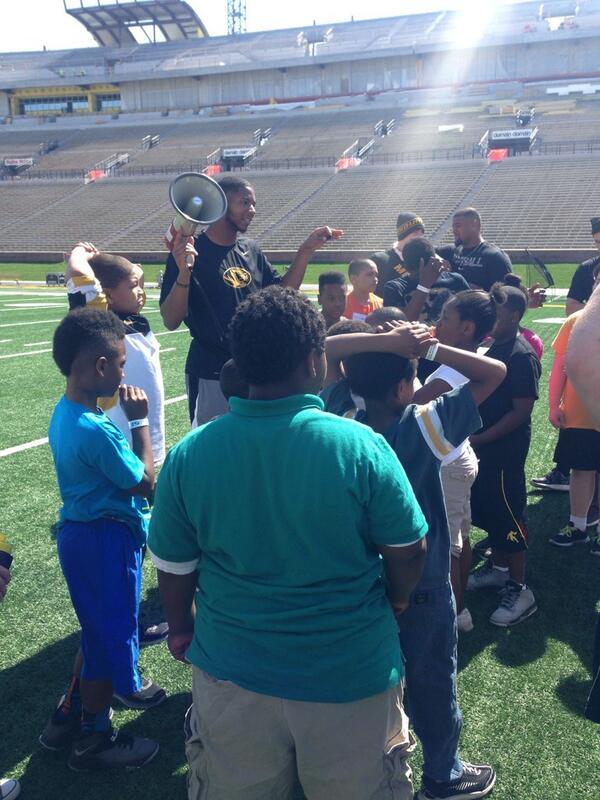 Hours before the annual Black and Gold Football Game on Saturday, the Mizzou Football program held a clinic with Big Brothers Big Sisters of Central Missouri to give young fans a chance to get to know their football heroes on a more familiar basis.

Kids gathered at The ZOU to run drills and play games with the players and meet Truman. Defensive lineman Markus Golden said the event was a success because it helped kids in the community.

“That’s what it’s about: Coming out here and helping the kids and making their day better,” he said after Saturday’s event. “I felt like a lot of the kids got better today, and we just want to keep the kids in shape while they’re young.”

Markus’s biological little brother, Gerrelle Golden, participated in the camp and said he should be named MVP of the day.

Linebacker Denzel Martin agreed that the kids improved over the course of the clinic and said he saw a lot of competition out of them as they ran, threw and caught footballs.

For the kids who attended the camp, meeting the players was just as good as the skills they learned.

“My favorite part about today was that I got to do football stuff today and hang out with the football players,” Katie Bush, a participant said, Gerrelle agreed that he enjoyed hanging out with the players.

Wide receiver Bud Sasser helped organize and lead the event and said he considered it a success.

“I feel like everyone came out here with a plan to get better, have fun, just compete and just try to do their best to win,” Sasser said.

Pinkel Dance in the Zou
Scroll to top