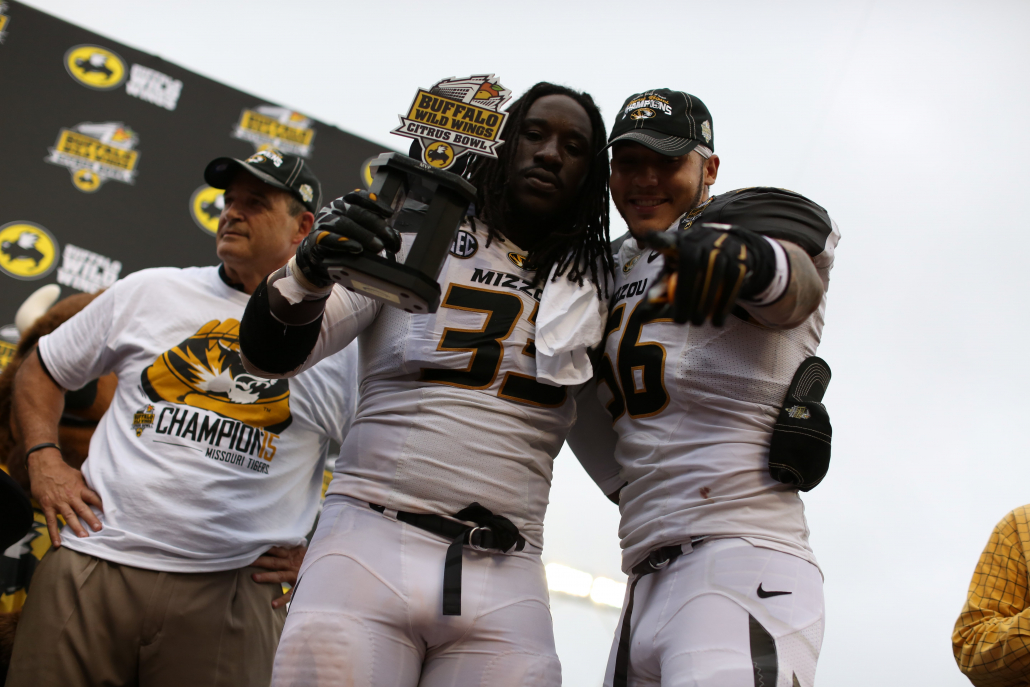 Behind a dominant rushing attack and a stout defensive effort, Mizzou Football defeated Minnesota 33-17 in the 2015 Buffalo Wild Wings Citrus Bowl to claim its third consecutive bowl victory and secure its second straight season with 11 or more wins.

Marcus Murphy ran for 159 yards, Russell Hansbrough added 114 and a touchdown, and Markus Golden had four tackles for loss, including 1.5 sacks, and forced a fumble en route to being named the game’s MVP.

Andrew Baggett put the Tigers on the board with a 21-yard field goal a little more than halfway through the second quarter. A quick stop by the defense put the ball 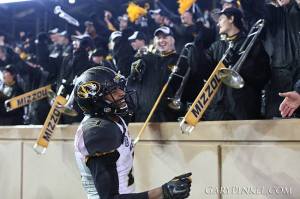 back in the offense’s hands, and Maty Mauk connected with Bud Sasser on a 25-yard fade down the sideline to give Mizzou its first lead of the game, 10-7.

In all, the Tigers outgained the Gophers 156-41 in the second quarter.

The second half started with a bang, as Baggett and the Mizzou special teams unit executed a perfect onside kick, which Ian Simon recovered at the Minnesota 47. Four runs, including a 25-yarder by Murphy, put the Tigers in field goal range, and Baggett nailed his second kick of the day, this one from 33 yards out, to extend the Mizzou lead to 13-7.

A touchdown by Minnesota on its ensuing possession put the Gophers up by one, but after senior tailback Tyler Hunt recovered a muffed punt, Mauk put the Tigers back out in front with a gutsy 18-yard scramble for six.

A Minnesota field goal made it 19-17 after three quarters, and then Mizzou, like they have all season, buckled down in the fourth quarter to secure the victory.

It all started with a 78-yard touchdown scamper by Hansbrough, who took the
handoff at the Mizzou 22, exploded through the hole up the middle, and outran the Minnesota defense on his way to the endzone. The next possession, Mauk dropped a dime to Sasser in the back corner of the endzone to stretch the Mizzou lead to 33-17. 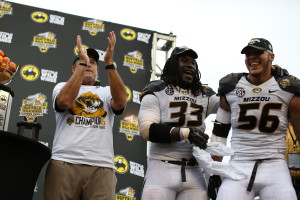 Sasser finished with seven receptions for 68 yards and two touchdowns.

On the day, the Mizzou outgained Minnesota 434-373, and 337-106 on the ground. The Gophers entered the contest averaging nearly 225 rushing yards per game.

By limiting Minnesota to just 373 total yards of offense, Mizzou held nine of its final 10 opponents to under 380 yards. For the season, the Mizzou defense was one of the stingiest in the SEC, ranking first or second in every major defensive category. In SEC play, Mizzou ranked first in rushing defense (115 YPG), first in total defense (300.8 YPG), second in scoring defense (19.1 PPG) and second in passing defense (185.8 YPG).

The Citrus Bowl victory gives the Tigers their first three-game bowl win streak since they won three straight in 1973 (Sun Bowl), 1978 (Liberty Bowl), and 1979 (Hall of Fame). The win also breaks the school record for most wins in a two-year period. The 11 victories this year, combined with the 12-win season in 2013, breaks the previous Mizzou record of 22 wins from 2007-2008.

Mizzou has won 76 games since the start of the 2007 season, the fifth highest total in the nation in that span.

With the Victory, Mizzou…