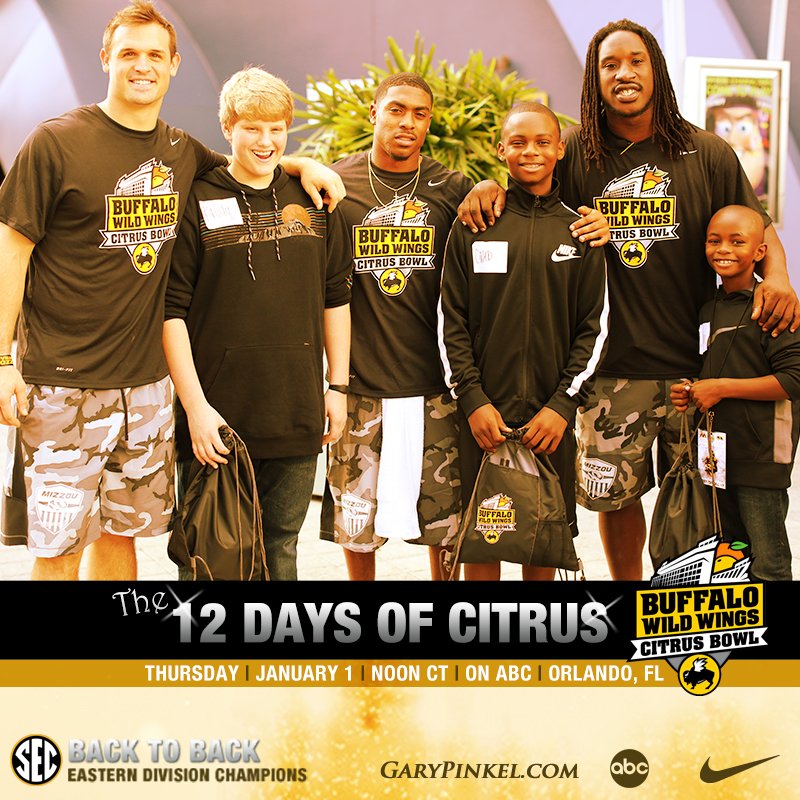 Mizzou Football Family teamed up with kids on December 27 to explore Disney Quest, an indoor interactive theme park in Downtown Disney. Running back Marcus Murphy, linebacker Michael Scherer, and defensive end Markus Golden showed these kids all around Disney Quest to play games and hang out for the day, including riding a simulated roller coaster and shooting some hoops.

“He shoots better than you!” joked Murphy about Golden’s basketball skills.

Mizzou Football is staying in Orlando in preparation for the 2014 Buffalo Wild Wings Citrus Bowl. Their hotel is very close to Walt Disney World and Downtown Disney, which gave them the opportunity to spend a day at Disney Quest and have some fun with these kids.

Giving back to the community is very important to Mizzou Football and Head Coach Gary Pinkel. After every home win this season, Pinkel signed and auctioned off his game day visor to raise money for a local charity. Teaming up with kids for a day also represents the family atmosphere that is so important to Pinkel and the Mizzou Football Family. Just like every Mizzou Football newcomer is given a “big brother” to learn from, Murphy, Scherer, and Golden got the chance to be “big brothers” for a day to youngsters at Disney Quest.

The back-to-back SEC East Division Champion Tigers will take on Minnesota on Thursday, January 1, in Orlando, Florida in the 2014 Buffalo Wild Wings Citrus Bowl. Kickoff is set for 12:00 p.m. CT and the game can be seen on ABC. Fans can follow Mizzou Football on Twitter, Instagram, and Facebook and listen in via Tiger Network radio affiliates for updates throughout the game.