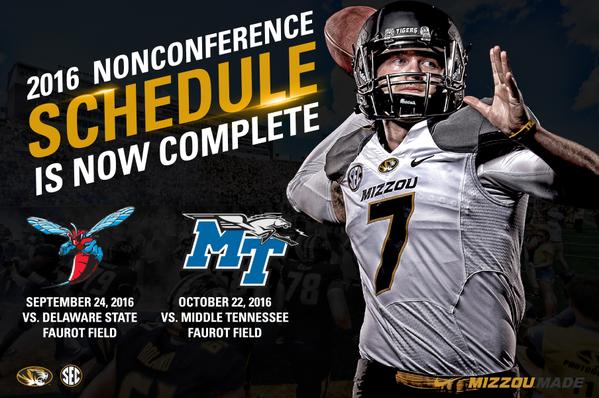 Games with Delaware State, Middle Tennessee round out the nonconference action

COLUMBIA, Mo. – Mizzou Football has announced its finalized 2016 nonconference schedule, as announced Thursday by the University of Missouri Athletics Department. In addition to the already scheduled West Virginia and Eastern Michigan games on Sept. 3 and Sept. 10 of 2016, Mizzou has added home games against Delaware State (Sept. 24, 2016) and Middle Tennessee (Oct. 22, 2016).

“We’re very pleased to have the 2016 nonconference schedule finalized and certainly thank everyone we’ve worked with to make this happen,” said Executive Associate Athletic Director Bryan Maggard, who oversees football scheduling for Mizzou. “We also want to make sure and thank our fans for being patient as we work through future scheduling challenges related to conference transition.  We feel that this is a very exciting schedule for our fans and program.”

The game between Mizzou and MTSU will be the first of a three-game series agreed upon by the schools, with future games set for Sept. 17, 2022 in Murfreesboro and for Sept. 9, 2023 in Columbia.

All kickoff times and television information will not be established until a later date, and dates of games are subject to change, per potential television arrangements through the conference. The SEC schedule will be announced in the coming weeks to round out the 2016 schedule. Below is a look at the nonconference slate.

Less than two weeks remain before the two-time defending SEC Eastern Division champion Tigers kick off their 2015 season on Sept. 5 at home against in-state Southeast Missouri.  Tickets still remain for that game, and for the entire season at very affordable prices.  Those interested in learning more about 2015 tickets are encouraged to call the Mizzou Ticket Office at 1-800-CAT-PAWS (884-7297 locally) or visit online at www.MUTigers.com.