On Halloween, 9-year-old Mason Gray from Kansas City, Missouri dressed up as Coach Gary Pinkel for Halloween. His mother, Jennifer Gray, entered his picture in a costume contest and the word spread quickly about this Mizzou fan who was diagnosed with autism when he was two years old.

After Mizzou Athletic Director Mike Alden invited the Grays to Columbia for a football game in The ZOU, Jennifer shared this message via email:

“The following is a post I added to powermizzou.com after we were inundated with well wishes and kindness from so many: 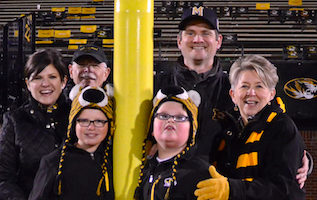 Our family is still on a “high” from the dream day Mason experienced!  A huge thanks to Gabe DeArmond who started all this with his costume contest and recognition of Mason!  The following is from the email I sent him earlier today:

‘It was an incredible day!  Best. Day. EVER!  Mason was grinning from ear to ear the entire time … and jumping up and down with excitement!  He had just run to the 50 yd line and back to the end zone before greeting Coach Pinkel for pictures. He was thrilled to be on the field, see Truman, and “hug” the goal post.  He takes the world in with all his senses and it was exhilarating to watch.

From beginning to end, the University treated us to a day of surprises … capped off by a big Tiger WIN!  We toured the Athletic Training Center, were given high fives and handshakes by the players and Coach Pinkel at Tiger Walk, then interviewed by Kathryn Lucchesi, introduced to Mike Alden, Coach Haith and a host of others …  They all were extremely gracious.  Mike Alden got right down on bent knee to Mason’s level and looked into his eyes to tell him he was so happy Mason was there!  After the game we were taken down to the field for pictures.  Mason’s excitement had built to such a high at this point I am not sure he could take it any longer and had to let out squeals of joy while sprinting to mid-field.  I don’t think we’ve ever seen him move that fast!  His big brother Thomas went to get him and I was overcome with emotion watching them running hand in hand back to the end zone where Truman was waiting to greet them and their daddy yelled, “TOUCHDOWN!”  Mason’s few moments of feeling completely free from a body whose systems fight to work in tandem are rare.  What a gift!!

Our family will never forget the last 48 hours.  From Halloween contests to fans on social media to meeting with a coach whose team just went 8-1 and yet all he was focused on was Mason – it is ALL emblazoned on our hearts.  I’m sure Mason had many sweet dreams.  He smiles when I show him the pictures.  The icing on the cake may have been as we exited the field through the tunnel and walked by the rope line of fans waiting to see players.  Along the walk many folks recognized Mason!  They wanted high fives from our special guy!  I mean we’ve always known he is a rock star and bravest soul we know, but for one incredible day he WAS a star!!  We are humbled by the attention and would just ask that anyone who’s enjoyed following Mason’s story take the time to be aware and be understanding of all those with special needs.  They may be different, but they are never less.’

It’s a very exciting time to be a TIGER!  The talent these young men exhibit isn’t just what is seen on the field. They are a family rooting for one another to achieve in football, but more importantly in life.  The metaphor of the game is not lost one them.  They seemed as genuinely excited to see Mason as he was them.  And all of that starts at the top.  Coach Pinkel has assembled this group and promotes a culture of devotion … to oneself, to team, to University, and to understanding that it’s always worth taking time to make a special little boy very happy.  I’ve never been so proud to be a TIGER!

Thank you for everything! 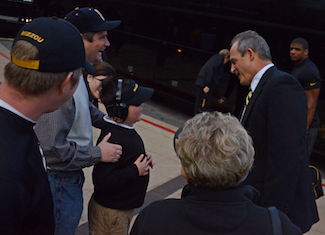 Mizzou Football Head Coach Gary Pinkel was very flattered by Mason’s costume. Pinkel is an activist for autism outreach and is involved with the Thompson Foundation in Missouri. This year, he helped raise nearly $500,000 for the foundation with Cardinals Manager Mike Matheny and other Missouri sports icons. With 1 in 88 Missouri families affected, everyone will be touched by Autism Spectrum Disorder in some way.