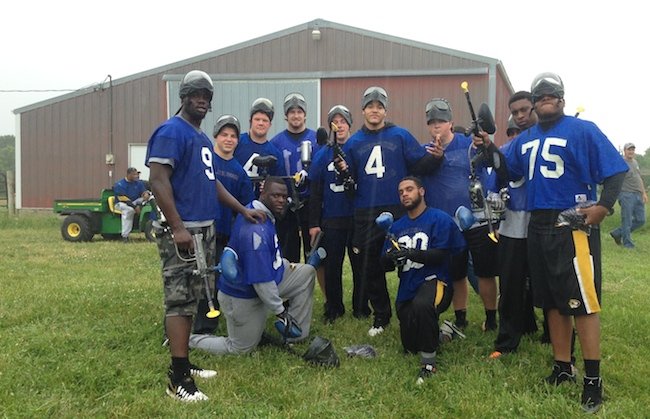 Mizzou Football is working hard this summer to prepare for the upcoming 2014 season, but they took a break Wednesday to bond over an afternoon of paintball.

It’s a team tradition to engage in some friendly competition during the offseason, and the entire Mizzou Football Family joined in, including Head Coach Gary Pinkel, Associate Head Coach Dave Steckel and Quarterback Coach Andy Hill.

Although the paintball games were just for fun, the team inevitably got a little competitive.

“I think the big person to look out for is Coach Stec,” offensive lineman Evan Boehm said, strategizing before the game. “If Coach Stec goes down, his team’s going to lose, guaranteed.”

Donning white, black, blue, and red jerseys, the Mizzou Football Family split up into teams to face off in the paintball battle. They ran through open fields and hid behind haystacks as they participated in a giant paintball game of Capture the Flag. Though they were competing against their fellow Mizzou Football teammates and coaches, they took no mercy on each other and shot paintballs rapid-fire.

“I’m already down,” defensive lineman Shane Ray of the Blue Team said. “They shot me in the face.”

In the end, the Blue Team ended up winning the first round.

“Like I said before, if Stec gets out, then the Blue Team’s going to win,” Boehm said. “I shot Coach Stec the first time, and I got the Marine out and once the Marine was out, the Blue Team prevailed. “

Pinkel played on the Red Team.

“Our team didn’t win,” he said with a laugh after the game. “But it was a lot of fun. We had a great time out there.”

Hill, who was on the Black Team, also had to deal with a loss.

“We felt a need to kind of get the game over with because we were winning so poorly,” he said. “So we went ahead and forfeited, I think is what happened. My gun is  a 1947 relic so I’m looking for the upgrade next time around.”

The Mizzou Football players and coaches had fun smack-talking each other throughout the competition.

“No we did not, we did not. Loser bracket over here.” Hill said.

Pinkel took a hit as well.

“Yeah I got hit there,” Pinkel said. “That’s after I hit a guy like eight times. He got me in the eye actually and he also got me in the top of my head. But I took about seven of them out. I’m a type of Navy Seal type guy. You know, mental toughness, discipline, that type of thing.”