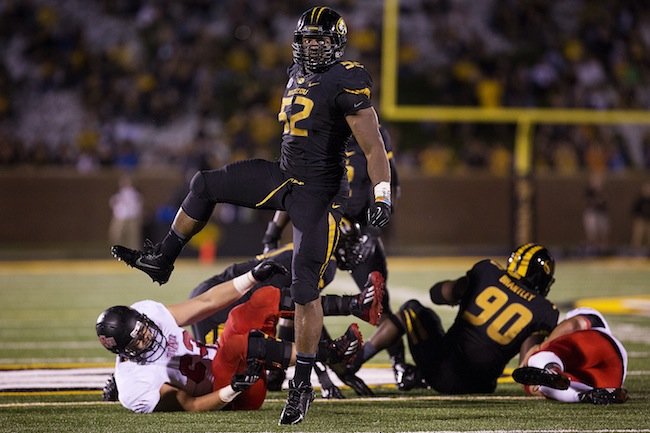 Mizzou Made Defensive Lineman Michael Sam, who earned his degree from Mizzou in December, has been selected as the recipient of the 2014 Arthur Ashe Award for Courage.

Before the 2013-14 season, the SEC Defensive Player of the Year announced to his team that he is gay, and on February 9 he came out to the world. ESPN is honoring Sam for “his courage and honesty that resonates beyond sports.”

On Tuesday, Sam sat down with 2013 Arthur Ashe Courage Award winner Robin Roberts on ABC’s Good Morning America to talk about what the award means to him and what his brave endeavor means for young people across America.

“It’s a great honor to be presented this award,” Sam said. “I think I can be a beacon, a light for young athletes who may be gay or may not be, for them to say ‘hey, I can be comfortable in my own skin and be like Michael Sam.’”

In addition to the courage he has displayed in publicly coming out, Sam’s courage has also helped him get through a rocky upbringing. Sam is one of eight children in his family. Two of his siblings have died, two brothers are in jail, and one disappeared and has not been found.

In a USA Today article, Maura Mandt, executive producer of the ESPYS, calls Sam a “humble guy who isn’t looking for any accolades.

“In deciding to give Michael this honor, while his courageous act of coming out is a part of it, the story is about the life he led growing up,” Mandt said. “A man who has consistently lived his life with integrity is never afraid of living this truth.”

The award is named for Arthur Ashe, the inspirational tennis star who died in 1993 after contracting AIDS from a blood transfusion. After learning that he had the fatal disease, Ashe campaigned to raise awareness about AIDS.

Sam joins a prestigious list of winners ranging from Jim Valvano, the first recipient in 1993, to Muhammad Ali, Billie Jean King, Cathy Freeman, Nelson Mandela and Pat Summit. He is only the second football player ever to win the award, as former NFL Safety and Army Veteran Pat Tillman was honored in 2003.

The soon-to-be first openly gay NFL player will receive the award given to individuals who transcend sports at the 2014 ESPYs on July 16.